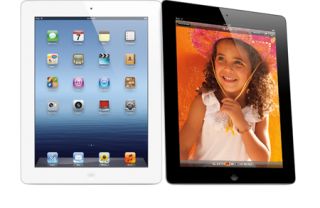 We're seated in the second row at Apple's launch event in London, being relayed live from San Francisco, at which the iPad 3 is expected to make its world debut.

There's been speculation galore, with suggestions that the new version of Apple's tablet will have a high-definition Retina display, and will go on sale from March 16th.

Will we also see an updated Apple TV? Or the introduction of high-resolution music on iTunes? All is about to be revealed.

Now we're talking about the quad-core A5X processor. "It makes everything you do feel real fast and smooth."

And that's a wrap folks. Still confused about the name. Is it really just the "new iPad". Seems a bit lame.

Sitting through lengthy demonstration of iPhoto for iPad, costs $4.99, available today. Works with images up to 19 Megapixels. Will also be available on iPhone. Looks very clever.

Lots of gaming stuff being shown now to demonstrate how lovely the new Retina display looks. And everyone still calling it the "new iPad". Hardly original.

More interesting is that Apple claims it has more memory and screen resolution than either the Xbox 360 or the PS3.

Garage Band now has Smart Strings, a Note editor and you can push through iCloud too. There's new​ sharing, too.

More updates to iWork and iMovie, introducing iPhoto for iPad. The latter has new gestures, new effects, multi-touch editing, and you can beam photos directly between devices.

New iPad can also be a personal hotspot too, provided your carrier supports it.

Still no confirmation of the official name.

Comparing to a Tegra 3, Apple says the A5 is "twice as fast" and the A5X offers "four times the​ performance."

Next feature: iSight camera. Five-megapixel illuminated sensor on the back, five-element lens, IR filter, and ISP built into ​the A5X chip. Similar to iPhone 4S.

And 1080p HD video recording. Also has voice dictation: there's a new key on the bottom of the keyboard, a microphone. Supports US English, British, Australian, French, German and Japanese.

New iPad gets "next generation" 4G LTE wireless. Great if you live in America. Now if only we could get some of that speed in the UK... we're stuck with 3G for now.

Yes, we know it's good Tim and people like it, let's cut to the chase.

"Everyone's been wondering... who will come out with a product that's more amazing than the iPad 2?"

"Yes: today we're announcing the new iPad, and it's amazing."

Apple claims new iPad has over one million more pixels on its 9.7in screen than a Full HD TV.

It also gets A5X processor and quad-core graphics.

From today movies and TV shows in iTunes will be available in 1080p. And there's a new Apple TV box supporting 1080p with "a new streamlined interface" (see above and below). iTunes in the Cloud now supports films.

New Apple TV also supports Photostream, costs $99 (so that will be £99 over here we assume). Available from next week.

"iPhone, iPad, iPod touch are all based on iOS and we have now sold an astonishing 315 million ​devices through last year, 62 million in Q4 2011."

There are currently 585,000 apps in the App Store. And as we previously reported, 15 billion apps have been downloaded. Oh, and there are now 100 million iCloud users.

And we're off. Apple CEO Tim Cook is on stage talking about the success of the iPad in a post-PC age.

"Apple has its feet firmly planted in the post-PC market... it plays to our strengths, it's what we love to do."