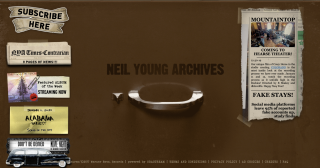 Hey Hey, My My. You know CES is in full flow when a rock legend announces a new partnership – from the Venetian Hotel in Las Vegas, no less. Never ones to be a Cowgirl in the Sand, we headed Downtown for a while, to learn more.

So what's on the Lookout Joe? Lenbrook International, the company behind myriad hi-fi brands and technologies, including the high-resolution streaming service Neil Young Archives (NYA), has just announced an agreement to integrate NYA into the BluOS high-resolution multi-room streaming platform. Both Homegrown Canadian talents, the partnership follows hot on the heels of an earlier announcement that BluOS is starting to add OraStream’s adaptive streaming protocol as part of its goal to provide Four Strong Winds levels of options when it comes to hi-res music content for its users.

Back in September, we announced that Google Assistant was coming to Bluesound, NAD and Dali BluOS kit. The integration of Young's hi-res music streaming service to these products will doubtless signify a Harvest Moon for North American fans.

This latest announcement means that in the first quarter of 2020, users of BluOS enabled products from NAD Electronics, Bluesound and Dali in North America will be prompted to update their players for the unique opportunity to sample Neil Young Archives’ song of the day and album of the week in hi-res, with a simple Powderfinger tap of a button in the BluOS Controller app. Users interested in subscribing to the full NYA service will be able to subscribe through the BluOS app, while existing subscribers of Neil Young Archives can simply enter their details into BluOS to access the service.

Young, ever an advocate of going Out on the Weekend, launched Neil Young Archives in 2018, an ambitious project that has tens of thousands of paid members. It was described as a “Revolution in fandom” by the Guardian. If you want to keep on Rockin' in the Free World though, a full subscription isn't actually free – it'll cost you $19.99 per year. Still, it's a novel way for Young to carefully curate and stream his hi-res music to fans without the damaging compression so prevalent in today’s mass market streaming music world. His website and app provide access to all of his audio, video, notes, lyrics, memorabilia, original manuscripts and news.

For years now, Young has been warning fans and the music industry to take better care of recorded content and to provide it in its fullest and least compressed form so that future listeners can avoid the Barstool Blues as a result of lossy files and enjoy tracks as the artist intended. Indeed, on NYA's news page, the quotes "Quality whether you want it or not" and "Be great or be gone" frame headlines.

“I am happy to be able to offer this as a new benefit to NYA’s existing subscribers,” said Young. ”For the first time they’ll be able to stream all my archives’ audio content directly to equipment capable of playing it without adding any compression. I’m also excited that North American users of BluOS hardware can sample my archives by listening to the song of the day and album of the week.”

Young was hardly an Unknown Legend before the partnership with Lenbrook International was announced. Now, if you own a BluOS enabled product from NAD, Blueosund or Dali in North America, he'll be practically impossible to ignore – like Cortez the Killer.