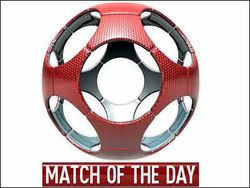 The deal will also see the Saturday night showing of Match of the Day available on the BBC iPlayer for the first time.

Previously only Match of the Day 2 was available on BBC iPlayer but now both programmes will be available on the catch-up TV service.

The Saturday night airing of Match of the Day will become available at midnight on Mondays.

Match of the Day will celebrate its 50th anniversary in August 2014.