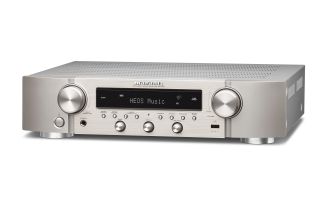 Marantz has announced a new slimline stereo network receiver, aimed at those who want to upgrade their TV sound from a traditional soundbar, without making the leap to a multichannel AV receiver.

The Marantz NR1200 has been built from scratch as a high-performance two-channel receiver, delivering Marantz’ signature sound alongside an impressive power output of 75 watts per channel. That’s despite the receiver’s slim chassis standing smaller than the height of a CD case.

Inside, the Marantz NR1200 features a newly designed amplification section, with separate, symmetrical left and right power amplifiers. These share a centralised power supply with independent windings for each critical function.

That means the power transformer is wired independently from the circuits of the amplifier, preamplifier, wireless module and front display, which should improve channel separation, reduce crosstalk, and help preserve clarity.

As far as inputs, the Marantz NR1200 has you covered with five HDMI inputs, plus one HDMI out with ARC, which all support the latest AV standards, including HDCP 2.3, 4K video at 60Hz, 4:4:4 Pure Color sub-sampling and HDR content (HDR10/HLG).

Despite being a stereo receiver, the NR1200 will automatically down-mix all surround formats so there should be no problem with compatibility.

Of course, the NR1200 comes with all of the modern connectivity features you’d expect. That means Bluetooth (including a “Bluetooth out” feature for connecting wireless headphones) and Apple AirPlay 2 connectivity and DAB+ radio playback (the US model will have AM/FM radio tuners rather than DAB+/FM).

It also features HEOS Built-in, the streaming service built by Denon and Marantz, for streaming from Spotify, Amazon Music, Tidal, TuneIn Radio and local network sources. The NR1200 can also work as part of a HEOS multi-room system if you own other compatible HEOS products.