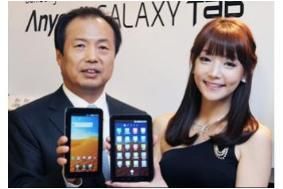 However, it faces competition: Apple's iPad, still not on sale in Korea, is due to hit shops soon, and reports say LG is preparing its own tablet device, due on sale early in 2011.

Originally due to be launched globally in late September, the Galaxy Tab finally made its debut in the past few weeks, and was officially unveiled in Korea yesterday.

And while Apple's Steve Jobs has famously said that devices with screens smaller than the iPad's 9.7in will be 'dead on arrival', Samsung's Shin is confident the 7in Galaxy Tab will prove popular, and reach sales targets set before the delays.

'The duty of a business is to make a good product,” he said, adding that 'The 7-inch tablet PC is now out in the market. The verdict will be delivered by customers.'

He pointed out that the device has already been well-received in other markets, such as the USA and Europe: 'The demand for the Galaxy Tab was strong backed by a positive consumer response. Samsung has no problem in exceed one million in sales within this year.

'The local debut of the Tab had been delayed a little bit. But there is little doubt it will attract domestic consumers just like the popular Galaxy S.'

Meanwhile Korean rival LG is expected to come to market with a similar device, currently being referred to as the 'LG Pad', early in 2011. It will have an 8.9in screen – halfway between that of the Galaxy Tab and the iPad –, an NVIDIA Tegra 2 dual-core processor and will run Google's forthcoming Android-based Honeycomb operating system.

A senior LG source told the Korean press on Wednesday that 'LG Electronics decided to launch a new tablet PC, so-called LG Pad, both in the domestic and overseas markets in the first quarter of the next year when Google unveils Honeycomb, [its] tablet PC-version Android OS.'

But Samsung's Shin says the company is ready for this competition: 'Various-sized tablets will come onto the market, in addition to the existing 7-inch and 10-inch models. For business sustainability, Samsung is preparing to expand tablet models with different-sized displays.

'Samsung Electronics is trying to root itself as the leader of the tablet PC market and is currently preparing diverse tablet devices.'

He confirmed that the company has no plans as yet to launch Wi-Fi-only versions of the Galaxy Tab, and expects the new device to contribute significantly to the company's overall smartphone sales.

Shin said the company is now targeting huge expansion of its smartphone business: in 2011 it aims to ship 40m handsets, twice as many as this year's expected figure.