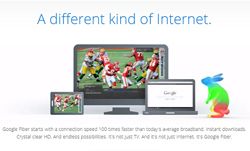 Google Fiber, launching in the US, is set to see Google become an internet and TV provider.

The service, which is set to be trialled first in the Kansas City Metropolitan Area of the US, will bring 1 Gigabit internet speeds, ten times faster than the 100Mbps offered by Virgin Media, currently the fastest in the UK.

Alongside this internet service, Google will offer users the chance to bundle in a TV service that offers live and on-demand content in high definition.

In a post on the Google blog, the company said: "Google Fiber is 100 times faster than today's average broadband. No more buffering.

"No more loading. No more waiting. Gigabit speeds will get rid of these pesky, archaic problems and open up new opportunities for the web."

In order for the trial to go ahead, users in the area will have to register their interest and pay $10. When enough people register in a given area, Google says it will begin installation.

Google Fiber TV promises to carry hundreds of channels in the US, with tens of thousands of shows on-demand and in HD.

The set-top box promises "eight tuners and 2TB of DVR storage... you’ll never have to miss a show again".

You’ll also get a brand new Nexus 7 tablet – made by Google and Asus – that you can use as your remote control.

For now the Google Fiber service is limited to the Kansas City Metropolitan Area, though should it be a success it's easy to imagine the service rolling out across the US and in time perhaps to the UK.