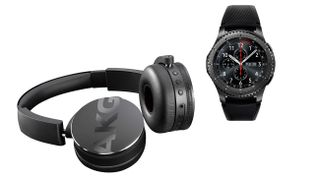 Who said cracking tech deals in July were exclusive to Amazon Prime Day?!

Right now, there’s a free pair of five-star AKG Y50BT headphones up for grabs for anyone purchasing a £199 Samsung Gear S3 Frontier smartwatch at Argos this whole month – a very nice bonus if you happen to be in the market for some new wristwear.

While no longer the very latest smartwatch from Samsung, the Gear S3 Frontier is a very decent choice for those looking to get some good exercise tracking features along with the connected capabilities.

It has built-in GPS for running and cycling, and includes an optical heart rate monitor, barometer and speedometer among other sensors. It also has an automatic exercise recognition system for logging your other workouts and sports.

While not technically a swimming watch, it is IP68 certified which means you can submerge it in 1.5m of water for up to 30 minutes.

More to the point, of course, the on-ear AKG Y50BT headphones included in the £199 deal are winners of multiple What Hi-Fi? Awards, and ordinarily retail at around the £70-£100 mark. Despite the affordable price, there’s impressive detail and dynamics on offer and an excellent level of clarity over Bluetooth. You’ll also be able to use them for taking calls through your phone and watch.

The handy little 1.3in 360 x 360 AMOLED touchscreen display on the watch will mean you don’t have to take your mobile out of your pocket to have control over your music with music apps such as Spotify available on the Gear S3’s Tizen OS platform.

The Samsung Gear S3 is compatible with most Samsung phones, most Android phones and even iPhone.

Launched in 2017 but updated with plenty of new features since, the Gear S3 range was superseded earlier this year by the Samsung Galaxy Watch (£80 more expensive), which doesn’t currently come with free headphones.

The AKG Y50BT headphones bundle deal lasts until 27th July 2019 or when stocks run out.