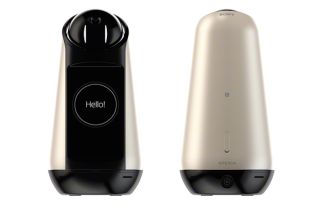 If the likes of the Amazon Echo, Google Home, Apple HomePod and indeed Sony’s LF-S50G are being classed as ‘smart speakers’, then we’d consider Sony’s Xperia Hello! nothing short of a brainbox.

For one, it is actually robot-like – not just in functionality but physical form too. It utilises a swivelling camera as the robot’s head and features a 4.6-inch 720p display as its body. And it's not just a body, the display can display information such as messages, weather and time.

Sony claims the Xperia Hello! can not only respond to voice control but is able to recognise different family members and adapt its responses specifically to that person. This is possible thanks to its microphones and sensors, which can detect people within three metres and then swivel by 340 degrees to turn and face them.

We imagine it also plays music too, but Sony is clearly pushing its more interesting selling points here.

Sony doesn’t expect to shift “a significant volume” of Xperia Hello!’s – the 150,000 yen (around £1000) price tag won't help – and currently only has plans to release it to the Japanese market before deciding whether to let it loose on the world. Either way, it certainly puts a new spin on smart speakers...

Here are all the many, many smart speakers

A brief history of the What Hi-Fi? Awards in magazine covers