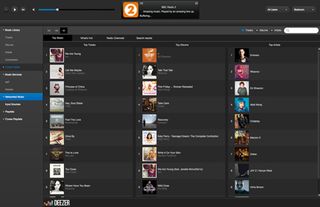 Deezer today announced some new features for its music streaming service. The first is called 'Hear This,' a daily feed which provides recommended artists from around the world based on the users' listening habits. It also gathers playlists created by friends as well as hand-picked suggestions from Deezer's music experts.

The other new feature is 'Explore'. This works alongside 'Hear This' but enables the user to carry out much broader yet refined searches. Music can be found via region or country, and listeners can also find suggested tracks from editors.

Deezer has also unveiled a brand-new app for Apple Macs. As well as providing access to Deezer's 30-million-strong song collection, all music files on the computer, including an iTunes library, can be combined in to one easy-to-manage library.

Deezer has seen substantial growth in the past year, says CEO Axel Dauchez: "One year ago we pledged to launch Deezer worldwide because we felt music deserved to be truly global. One year on, we are proud to say that we have over-delivered on our promises, with more than five million subscribers across more than 180 countries and a team of expert editors around the world sharing their love and passion for music"