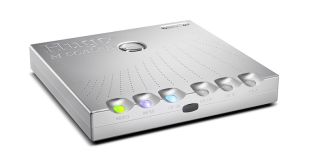 It can extend upscaling performance to 768kHz (from 96kHz input data) for Chord DACs with 768kHz-capable dual BNC inputs: DAVE, Qutest and the new Hugo TT 2 that was launched at the Munich Show earlier this year. But it can also be used with other DACs with suitable inputs - subject to their decoding capability of course.

To give the technology some context, the WTA filtering has over a million tap lengths compared to the Hugo’s 26,000 and DAVE’s 164,000. An infinite number of tap lengths is necessary for the perfect construction of an analogue waveform, and Chord has hit the million mark using the processing power of the new Xilinx XC7A200T FPGA chip.

£3495 (which is what the Hugo M Scaler costs) may be a lot to fork out for an upscaler, but after we tested the filtering technology in the BLU MKII upscaling digital/CD transport (£7995), we can certainly vouch for its effectiveness.

Outputs, on the other hand, include optical, coaxial and galvanically isolated dual BNC, the latter of which enables upscaling to the maximum 768kHz resolution (again, from 96kHz data).

The Hugo M Scaler’s chassis size aligns with the TT (Table Top) series and has been designed to be stackable with other units in the range. Those familiar with Chord Electronics products won’t be surprised to see the illuminated fascia-mounted spherical controls for input selection, output sample rate and ‘video mode’ for lower latency.

The Hugo M Scaler will be available in the autumn.

BBC 4K HDR iPlayer: after Wimbledon and the World Cup, where's next?