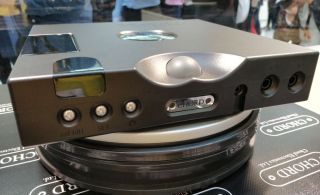 The first Chord Hugo TT, essentially a larger Hugo with a display and a full range of hi-fi connectivity, was launched a few years ago. It stands for ‘table top’, which in itself tells you a lot about the product. It’s bigger than the Hugo, and a desktop-orientated version.

This sequel – launched today at the Munich High End Show – has, as you’d expect, been subject to a number of upgrades, both inside and out.

Fundamentally, it’s founded on the new Artix 7 FPGA chip, which has been coded by Chord’s digital design consultant, Rob Watts, and claims to offer five times the processing power of the original Hugo TT.

There’s also a new power supply, designed to play ball with even the most demanding headphones, and the promise of improved noise-shaping over the original.

The Hugo TT 2 eschew the battery supply used in its predecessor and instead uses six super caps in the power supply unit, capable of delivering huge, linear dynamic currents: peak output currents of 5A and 9.3V RMS.

Outputs deliver just as much versatility. There’s balanced XLR, unbalanced RCA and three headphone outputs (two 6.33mm and one 3.5mm, which can be used simultaneously), as well as dual BNC DX outputs for use with Chord devices.

There are now buttons on the front (menu, set and power) for manual switching between filtering and crossfeed modes, and there’s a remote (which also works with the Hugo 2) in the box too.

It can be used in pure DAC mode, enabled for high-power when headphones are connected (including low and high gain modes), or used in amplifier mode for use as a digital preamp or when directly connected to speakers.