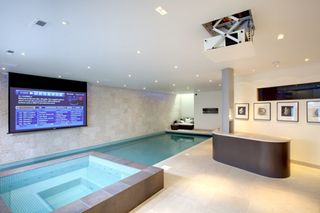 Whether you're planning to fit a new flatscreen, or plotting how you can have true home cinema without burying your room in wires and boxes, you can learn a lot from the CEDIA professionals tackling such projects every day. These guys have seamlessly installed kit in anything from a medieval castle to a superyacht, so they've got some expertise going spare.

This weekend saw the CEDIA (Custom Electronics Design and Installation Association) Region One Awards, which cover the best home entertainment and automation installs across Europe, Africa, Russia, and the Middle East.

In the spirit of inspiring your own upgrades - even if that's inspiration to buy an extra lottery ticket – here are the winners in all their glory.

The media room category is designed for AV installations that need to fit in an everyday room - not dedicated home cinemas.

The winner - Hampstead Media Room, by Olive Audio Visual - involved adding a movie and gaming system to a basement room.

As you can see from the pictures above and below, the installation used a clever way of hiding away the kit (including a JVC DLA-X3 projector; Panasonic TX-P50S20 plasma; Sky HD; Sony Blu-ray player; AirPlay-enabled Marantz receiver and B&W speakers plus Velodyne subwoofer).

Artistically backlit wall boxes were built to disguise the speakers and subwoofer, plus provide storage, while the drop-down projector screen is carefully placed to reduce ambient light when deployed.

The projector is equally artfully hidden away at the back of the room.

The entire system is controlled via an RTI handset that simplifies operation of the family's various AV and gaming options.

To Spain now, for a media room all the CEDIA judges praised - not just for its clever lighting, AV and security installation, but for how much fun the whole set-up looked.

Another basement space, this multi-purpose room can serve as anything from an everyday place to watch TV, to a home cinema room (projector screen replacing plasma), music practice place, and party central (there's even a drop-down mirror-ball and strobe lighting!)

The room uses a great selection of kit (including JVC projector, Samsung plasma, Rotel amplification and KEF speakers), and is integrated via an AMX control system that even allows you to see who's at the main door upstairs - and to let them in to join the party.

From Spain to South Africa now, and a stunning home cinema installation in what once was the client's double garage.

The space was extended by 3m to fit in two tiers of five reclining red cinema seats, each including 'ButtKickers' so you can feel as well as see and hear the movie action.

An existing store room was converted to house the kit rack - including Harman Kardon Blu-ray player and receiver, also a Panasonic PT-AE4000E projector - plus the owner's extensive movie collection.

The installation even finds room for the client's array of authentic cinema snack machines at the back of the room.

Paradigm speakers and subwoofers, plus Harkness projector screen - and an array of Charlie Chaplin memorabilia - complete the picture.

The second CEDIA home cinema winner this year is also in South Africa. This time it's a purpose-built, 15-seater movie room within a new development.

It would take too long to list all the excellent kit involved here, but the highlights include a Projection Design Avielo projector with anamorphic lens - so you'll always be viewing in exactly the right screen ratio - and a pro-grade JBL cinema speaker and amplification system.

There's even custom-built shelving at the rear of the room for the client's growing movie collection. We're officially jealous...

Back to the UK now, and a Smartcomm install that uses clever technology and design to deliver an eight-seater, state-of-the-art cinema in a relatively small space.

Centre stage is a Screen Research 2:40:1 X-Mask 2 curved cinema screen, which can be framed to suit a range of aspect ratios. It's fed from a Digital Projection M-Vision projector with an integrated mirror kit - this reflects the picture while concealing the projector from view (and hearing).

Not that you're likely to hear any projector over the storming sound of the Triad 9.2 speaker system, which powers out the client's massive movie collection via a Kaleidescape server.

Those eight seats are all electronic recliners, and the room's lighting options are almost endless. The whole lot is easily controllable via a Creston handheld unit, too.

The integrated home category recognises installs where AV is only part of the picture: lighting, security, air-con/heating and more also come into play.

First up is a smart install in a two-bedroom British apartment - being transformed for resale by a tech-savvy property developer.

With no room for a separate kit rack, T&T Automation built everything from speakers to Panasonic plasma and Blu-ray player, plus a Sky HD box and amplification, into a custom-built wall cabinet.

Elsewhere in the apartment, in-ceiling speakers deliver multi-room music and radio, with iPad control of both entertainment and lighting systems, plus the door intercom.

More British brilliance now, with an installation that had to work around the size and listed-status build of a 16th century barn.

The main TV is cunningly concealed in the stone-clad fireplace (above), while a second set in the family room 'floats' on a motorised bracket (below).

Lighting and a CCTV security set-up is also integrated into the automated system, which can be controlled via in-wall panels or an iPad.

Back in London, this developer wants to make sure one lucky buyer has a tech-packed property to move into.

This whole-house installation in Belgravia was a clear winner in this high-end category. In short, there's hardly an element of this gorgeous London home that isn't automated - from media room to swimming pool, lighting to bio-metric security system.

Every element can work independently or be controlled by the main house system, with in-wall control panels also providing room to room paging and intercom.

There's too much kit to list, but one of our favourite systems was in the media room (above), which offers both plasma and projector-based entertainment and seat-shaking D-Box action.

Why let your entertainment standards slip when you get on board your yacht? This latest installation for Sunseeker by Dawsons Group ensures great sound and vision both above and below deck.

Cabins are fitted with a wealth of Bang & Olufsen kit, including pop-up TV systems and music servers controlled via no fewer than nine iPads.

If the seaview is boring you, on-deck TVs can keep you entertained; like all the sets on board, they draw from a central Kaleidescape movie server system. The state-room surround system is mighty impressive, too...

This category recognises multi-property installs - in this case, the overhaul of eight, Grade-II-listed houses in a London crescent.

With the ornate 19th century plasterwork and detailing having to be preserved, SMC had to creatively install a combination of in-ceiling, in-wall and freestanding B&W speakers, plus a complex hidden cabling system to network everything from entertainment to security.

Multi-room Sonos systems supply music around every house, while an Apple TV boxes do the same for video - served up on customisable Loewe Individual flatscreens.

Many of the installs CEDIA members undertake require some innovative thinking to get the job done. This category recognizes the cunning solutions used to meet a client's specific needs.

The winner comes in the shape of the Aces High Media Wall installed by Grahams Hi-Fi: a multi-function home cinema, music lounge and card-games room, complete with screen hidden behind the owner's unique triptych artwork (above).

With no room for a rack, a false wall had to built to house all the kit - but access to this area could not be via a normal door, as that would have meant mounting the three artworks too far apart.

The solution was a proximity detector sensor, hidden behind one of the pictures, which activates an electric door mechanism at the swipe of a hand. A chain motor is fitted to one of the picture panels to allow space for the door to swing open.

Ah, the Awards category that always raises a snigger. But a neat rack for your install - with clearly labelled, smoothly laid cabing, easy-to-access components and superb support and ventilation - can make a massive difference from the start, and especially when you come to alter or upgrade the system.

And that's it for another year. I'm off to dream about living the life where a home cinema for your indoor swimming pool is a given...

Clare Newsome is a contributor to - and previous Group Editor of - What Hi-Fi? Sound and Vision, and was a judge of the 2012 CEDIA Awards.