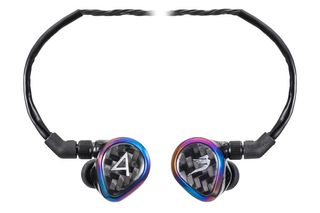 Layla (also known as PSF11) are the flagship in-ears, named after the classic Eric Clapton song. They benefit from 12 custom-made drivers: four each for bass, mid-range and treble, and what’s described as “the most sophisticated crossover network used in an in-ear design.”

The Siren range is produced in collaboration with Jerry Harvey Audio (JHA makes in-ear monitors for the likes of Alicia Keys and The Rolling Stones).

Founder, Jerry Harvey, claims: "The proprietary quad drivers deliver audio quality that will truly put you at the mix position in the recording studio, whether it’s hearing exactly what the mixer/producer and band wanted you to hear, mixing your own tracks or performing live.”

The Astell & Kern Layla headphones are available now for £1999.

The second pair in the range are named after Angie, by the Rolling Stones (you can call them PSM11 if you prefer). They feature the same crossover design as Layla, but only have eight drivers: two bass, two mid-range and four high-frequency.

The Angie in-ears come sporting a red and black Kevlar shell with a black aluminium bezel and inset carbon fibre. You get a similar selection of ear tips, headphone cables and a matching aluminium carry case.

The Astell & Kern Angie headphones are available now for £899.