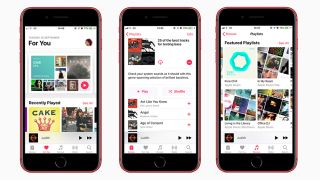 Apple Music has introduced the ‘Apple Digital Masters’ program for subscribers looking to find and stream the highest-quality songs available in the service's catalogue.

Digital Masters is essentially a rebranded version of its 2012-launched 'Mastered for iTunes' initiative, which provided engineers with free software and guidelines that allowed them to encode their songs from high-resolutions masters (ideally 24-bit/96kHz) and thus preserve their quality and provide users with iTunes-optimised digital files.

Such files were categorised under a ‘Mastered for iTunes’ section on the iTunes app, so it makes sense that the Digital Masters now have their own category on iTunes (and soon Apple Music). As iTunes will be no more come the arrival of iOS 13 and macOS Catalina this fall, a rebrand of the service was arguably necessary.

It's important to note that Apple is sticking to the lossy AAC format, as opposed to joining hi-res streaming pioneers Tidal, Deezer and Qobuz in offering lossless audio, but when it comes to offering high-quality recordings it’s certainly a step in the right direction. The service’s lack of lossless quality could become a more poignant omission if Amazon and Spotify begin to offer it, is as rumoured, though.