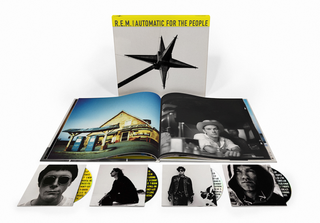 Craft Recordings – the catalogue division of Concord Music Group – is releasing the album on November 10th in several formats but, needless to say, the one we are most excited about is the four-disc Deluxe Anniversary Edition. It includes one of the first commercially available albums mixed in Dolby Atmos (Luca Turilli's Rhapsody released its Prometheus album in the format too).

We first experienced the perfect union between music and Dolby Atmos when the surround-sound audio format was showcased at London’s Ministry of Sound two years ago. And around the same time a live performance of the Choir of King’s College’s 1615: Gabrieli in Venice became the first ever Blu-ray Audio disc to use Dolby Atmos.

It makes sense, then, that albums are beginning to get the Atmos treatment. People have splashed out big bucks for the latest Atmos-enabled amplifiers and speakers, modules or soundbars, after all - and enough films are being released on Blu-ray with Atmos soundtracks.

And this is the sort of album to mark such an occasion. Who wouldn’t be intrigued to hear Michael Stipe’s echoic vocals or Peter Buck's storming guitar riffs on Drive spread around every corner of the room (and perhaps the ceiling too)? And just think how much you’ll have to fight back the tears hearing Everybody Hurts in the format.

Naturally, we hope this will be the first of many to come – a wish shared by President of UMG’s operations and advanced media Michael Frey, who says: “With Dolby Atmos, Automatic For The People delivers a powerful and emotional experience. At UMG we’re working closely with artists, producers and other members of the creative community to release even more albums in this incredibly immersive format.”

The Deluxe Anniversary Edition, which is housed in a 12” x 12” lift-top box, also includes a 60-page book as well as previously unreleased material selected by the band.

Dolby Atmos: what is it? How can you get it?

Behind the scenes with Dolby Atmos at Ministry of Sound

6 of the best home cinema amplifiers