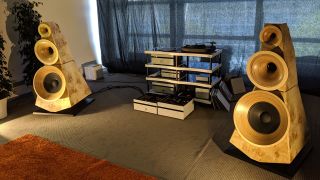 If you can imagine it, you can probably find it fully-formed and blaring out Paul Simon at the High End Munich show. The German high-end audio fair has become a crucial fixture on the hi-fi calendar, not just to see brand new products but also to see some amazing, eccentric and at times plain confusing music systems.

Gargantuan speakers are everywhere, powered by scarily-expensive lumps of electronics and fed by sources sporting technologies that are often impossible to explain (even by the designers themselves).

But for all the mad professor designs, there is also an unrivalled selection of brilliant-sounding hi-fi products. If you want to hear a £1 million music system that reignites your love of music, the High End show is a great place to do it.

In no particular order, here's what we saw, and heard, at Munich High End 2019.

What better place to start than a massive pair of electrostatic speakers? "Truth in sound" is what Martin Logan promises from its flagship, made-to-order Neolith speakers ($40,000) and they were certainly sounding staggeringly revealing being fed by electronics from Pass Labs.

While this list is in no particular order, if it were in ranked by sound quality, we'd certainly have the Fink Team room towards the top of the list. The most important speaker company you might never have heard of, the audio engineers behind Fink are some of the most revered in the industry and responsible for tuning all sorts of household-name products. Unsurprisingly, the Borg speakers (€24,000) sounded great.

The vinyl revival is old news in hi-fi circles and while there were plenty of demo rooms running record players, we also spied a fair few reel-to-reel players. Like this one, an immaculate-looking Studer A810 (we think).

Horn-lovers were in heaven in the Avantgarde room, with the German speaker company showing off a range of its horn speakers, including the Duo Mezzo XD (far left), yours for £30,000, and the Uno XD, £24,000. A thorough range of colours make this high-end speaker particularly appealing, if you've got the space and money...

Yamaha launched its high-end 500 Series last year and while it's positively affordable compared to some of the systems on show at Munich, it looks and sounds every bit the flagship hi-fi. It's still not cheap, of course, with each component likely to set you back around £5000 and the NS-5000 speakers costing closer to £15,000.

Can Dolby Atmos be hi-fi? If you'd heard the Miles Davis demo pumping out of PMC's Atmos system, the resounding answer would have been, 'yes'. PMC has turned out an exclusive mix of the biggest-selling jazz album of all time and in a permanently-packed demo room, complete with in-ceiling speakers, it was sounding superb.

Magico used the show to launch its new A Series speakers but we were happy to hear the larger M2 speakers, a three-way, four-driver speaker. Despite the under-stated look, which conversely makes them stand out at High End Munich, the speakers feature a layered, carbon fibre cabinet and a 28 mm diamond-coated Beryllium dome tweeter, and a £70,000 price tag.

Based on a 1960s Elipson design, the new €7000 Legend 3230 speakers were being demoed with Bryston electronics. Elipson has added one of its familiar spherical speaker housings - which incorporates an AMT ribbon tweeter and 6.5in aluminium/ceramic midrange cone - to a more conventional floorstanding cabinet beneath. Elipson also has a more affordable product in the pipeline, a new wireless €799 speaker called the W35.

Wharfedale had a busy show. There were the new high-end Elysian speakers, available in two sizes for £4500 and £7500, and sporting AMT drivers. And sounding smooth and expressive in the room. There was also the retro-styled Linton Heritage floorstander, set to cost around £1100, and promising that classic hi-fi look and sound. Last but not least, we have high hopes for the new Evo 4 range of budget speakers.

Mission used the show to introduce its latest flagship speaker range the ZX Series. There's a new ring dome tweeter and a new DiaDrive aluminium mid/bass unit. With the former, the dome is formed by two rings, with a voice coil placed in the centre to more efficiently drive the dome. The DiaDrive features an over-sized magnet - braced to improve response - and is now vented to reduce resonance caused by trapped air behind the diaphragm.

A positively affordable product being launched in Munich was the Dali Katch One, a new compact soundbar from the Danish speaker specialist. It sports no fewer than 10 drivers - driven by four, 50-watt amplifiers - and features every connection you might expect of a TV speaker: HDMI ARC, optical and 3.5mm inputs, plus aptX Bluetooth and a subwoofer output. A USB socket can accept a Google Chromecast Audio, allowing owners to connect the Katch One to their home network, too. It will cost £649.

MORE: Dali Katch One is a compact, versatile soundbar

Have you got £100,000 to spare? Good news, you can probably pick-up this Chord Electronics Ultima system. Well, not literally, each mono amp weighs 86kg. Sat alongside the Blu MKII and DAVE DAC, they were perhaps merely on show to make the newly-launched Ultima 2 and 3 look a little more affordable...

More horns! The Cessaro Alpha II speakers were impossible to miss and something of a divisive design (not alone on that front). The speakers feature TAD drivers, including a 16in TAD Alnico bass unit. It's a modular design, allowing you to swap out and upgrade components over time. You can even pick the colour of the cabinets and horns. The speakers were being driven by Ypsilon electronics and a Bergmann turntable and delivered an impressive realistic, natural sound.

We're in, "If you have to ask..." territory, here. The new Wadax Atlantis Reference DAC is pictured on the rack here (you can't miss it). It reportedly took 50,000 man hours of research and development to build and weighs 100kg thanks to its milled aluminium design. A monstrous pair of Kharma speakers were doing their best to make everything at the show look small.

Dynaudio didn't have anything new that we could see but it was taking up a sizeable space at the MOC to show-off its wide range of audio wares. The Confidence 30 speakers, above, were on demo duty, while the new big-boy Confidence 50 speakers were also on the stand. There was plenty of interest in the company's wireless Music range, too.

The BXT is an extension module which turns the Kii Three active speakers into a  floorstanding speaker with some 16 additional drivers. Promising to make your room shape and size irrelevant, unlike any other speaker, the Kii Three BXT demo room certainly sounded impressive. You'll need a cool £28,000 to hear it in your home.

Another set of excruciatingly expensive, love 'em or hate 'em speakers, this time from German company, Odeon Audio. The new Carnegie speakers feature a 38in woofer cone in a bass reflex design and were being driven by electronics from Russian brand, NEM, and a Reed turntable. Sure, it sounded pretty good, but you will need 89,000 euros for the speakers...

A £2750 turntable is bordering on affordable for this show and indeed for Vertere. The DG-1’s plinth uses a sandwich construction of three layers of acrylic reinforced with a steel chassis, while the aluminium platter has a bonded PETG (a thermoplastic polymer) mat and a cork/neoprene/nitrile disc on the underside for a rigid base. The DG-1’s arm takes a similar approach to the plinth by using a triple-layered construction to provide a stable, properly damped home for the cartridge. And it looks great.

The world's most expensive speakers? Quite possibly. That tends to be the claim and certainly the scrum to get into the Living Voice room testified to the brand's popularity. The best part of half a million pounds will buy you the Vox Palladian and the new Vox Basso combination pictured above (don't worry, you do get two of them). Kevin Scott of Living Voice has been perfecting his speakers' design for the best part of 30 years and the end result is nothing short of spectacular. Instruments may never have sounded so realistic as they do played through this system.

High End Munich was the place for the launch of the SME Model 12a turntable, yours for £7950. The styling will certainly help it stand out, with the main unit machined from top-of-the-range, aerospace-grade aluminium. A separate box houses the power supply and electronic control unit, minimising the risk of any external interference or vibration.

Goldmund's £67,500 Prana active speakers utilise built-in 600-watt Telos amplifiers, are based on the company's proprietary wireless system, and are mounted on an aluminium Z-frame design. And they look like robots.

German uber-high-end turntable company, Transrotor, is a fixture at the Munich show and was once again showing off some of the world's most expensive turntables. The Artus, left, will set you back $150,000, while the Jupiter, right, is a measly $5500. Why so expensive? Well, the Artus promises a completely level playing platform using 'cardanic suspension' - a gimbal design that ensures it pivots around a single axis. Made from solid aluminium and acrylic, it also features a contact-less magnetic field drive and a balanced tone arm (you'd hope so, too). And it weighs a quarter of a tonne.

Nagra's reference system looks like nobody else's, so it's always worth taking in the view. The reel-to-reel machine and glowing VU meters are a highlight. Like that? You'll love our look at everything behind-the-scenes at Nagra.

Moon was showing off the new 860A v2 power amplifier. As its name gives away, it's the second-generation version (and replacement) of the existing 860A, which sits in the middle of the brand’s power amp line-up. The v2 introduces improved circuit design at input and gain stages, new internal bias control, and a new integrated DC coupling filter that allows for better pairing with preamplifiers.

Fyne Audio's imminent flagship F1-12 (from €27,250) were in action in Munich. The new speaker follows on from the brand’s F1-10, which made its debut last year, expanding the size of the proprietary IsoFlare point source driver (which boasts isotropic qualities to improve stereo imaging) from 10in to 12in. Nested inside is a 3in titanium alloy dome tweeter.

30 years after launching its debut product, the WB-One Turntable, and two decades after its Full Circle turntable follow-up, Wilson Benesch is introducing yet another innovative, built-from-the-ground-up turntable. The GMT ONE System marks the company’s 30th anniversary and is jam-packed with new technologies, most of which we feel will need a sit down with a cup of tea to understand. "The most accurate drive system ever developed for a turntable," is one claim, so we can't wait to hear it in action once it's finished.