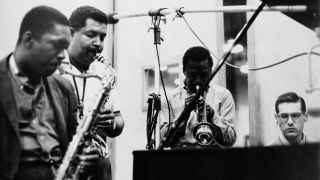 As if all manner of high-end hi-fi wasn't enough of a draw, there's something else to look forward to at the High End Show: an exclusive remix of the biggest-selling jazz album of all time.

British loudspeaker manufacturer PMC has remixed Miles Davis's quadruple platinum album Kind Of Blue, as well as his Grammy-winning Sketches Of Spain, in Dolby Atmos especially for the show. The firm was granted permission to rework the albums by Davis's estate.

The project started life as a 5.1 remix of Sketches Of Spain a few years ago. When Patist suggested they remix both albums in Dolby Atmos, the Davis family arranged for the original master tapes to be retrieved from Sony’s Legacy Recordings.

The Davis family were reportedly pleased with the results, saying: "This is the way Miles’s music should be heard."

PMC has now been granted permission to share the results at the High End Show in Munich. The engineers will be accompanied by Miles's son Erin Davis and his drummer and nephew Vince Wilburn. Together with Miles's daughter Cheryl Davis, Erin and Vince manage the Miles Davis estate.

“This unique event represents the debut of what can be achieved through the sympathetic understanding of the artist and their art," said Peter Thomas, PMC’s founder and owner.

"Everyone at PMC is passionate about the authenticity of music reproduction and our close relationship with the artists and studios enables us to do justice to the creative results the artist set out to achieve,” he added.

The Munich High End Show takes place from 9-12th May. Here's what else to expect.

The best music to test your system