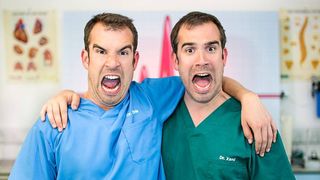 Homeschooling can be a challenge at the best of times, and any experienced parent-teacher will tell you that both structure and variety are key – as well as some carefully planned breaks. Homeschooling videos and educational TV shows are the perfect assistance.

Streaming services such as Netflix, Amazon Prime Video, BBC iPlayer and YouTube are stacked with some of the best TV shows for homeschooling.

Whether you're a video service subscriber, a pay-per-view renter or you'd like to own an educational TV series, we have options for you below covering topics including maths, English, geography, history, art, the sciences and more.

There's the best of the BBC and homeschooling shows from further afield too, and make sure to check out the BBC's new children's section on the iPlayer.

Whatever TV shows you'd like to stream with your kids at home, we'll show you how to do it wherever you are in the world. Now pay attention and no talking back there. You might learn a thing or two.

With ten years and five seasons under its tunic, Horrible Histories is quite simply the very, very best history show around. To say that it's funny and informative is a double understatement.

Covering topics from the Celts to the World Wars with accuracy and humour, it's a rip roaring watch for the whole family. You can pay for it or buy it on all sorts of services but you can watch three seasons free of charge on iPlayer, too. Oh, and when you're done with that lot, there's also a film.

TED ED (all subjects, all ages)

TED isn't just for adults. Add another two letters and you get the child-focused version of the inspirational lectures platform. The best place to begin is the TED ED website and then sign yourself up to the daily newsletter which has been launched in response to the worldwide need for home schooling. Each day you'll get video lesson suggestions and playlist options dropped into your inbox.

There are topics of all kinds for all ages including riddles, why venomous animals live in warmer climates, the chemistry of skunk spray, how bird vomit helps us understand history and much, much more. Just bear in mind that videos are short, so have a few cued up.

Pretty racy from the off, these excellent and engrossing stories of the Ancient Greek gods are very much for those already familiar with the birds and the bees. There are 20 x 26-minute episodes covering some of the major stories in the pantheon, including the birth of the gods, Zeus's loves, Prometheus, Orpheus, Daedalus and Icarus and, of course, Heracles.

Each is a mix of animation, classical paintings and sculptures, all topped by a serious-sounding voice-over with the fascinating story to tell. We challenge you not to get hooked. It's all free and available in HD on Prime Video.

Join Geo, Milly and Bot on their mathematical adventures around Umi City. These fun, friendly episodes focus on recognising patterns, identifying shapes and basic arithmetic in a bright, colourful and morally palatable world.

Watch out for the brilliant Shape Bandit episode and anything featuring the deep-voiced Umicar. You'll find four seasons available to buy and three for those with Prime Video subscriptions.

Disco plus Ge-Force equals a high-concept geography-based TV show for younger children which manages educate on the sly. Your young ones will be captivated by the action of the Go Jetter Academy explorers and very amused by the failings of arch-nemesis Grandmaster Glitch, but they'll also be able to tell you all about the Pyramids and the Leaning Tower of Pisa once they're done. Of course, it's all about Ubercorn the disco unicorn, really.

There are two seasons apiece of these epic David Attenborough natural world shows, and it doesn't matter if you've already seen them before. It's time to watch again. Both the Blue Planet and Planet Earth offer brilliant opportunities to discuss topics from zoology to ecology.

Naturally, there's a focus on anatomy and animal behaviour but they're a brilliant way to foster positive attitude towards caring for the world around us.

Save the Netflix Our Planet series for when 4K comes back.

The characters are a bit two-dimensional and the world's all a bit happy and shiny, but find us another show which has a child-friendly song about friction. Blaze and the Monster Machines centres on a group of friendly monster trucks who like nothing more than racing around jump tracks while explaining some really quite complicated physics concepts in a nice, easy way. Also features maths.

Four seasons available on Prime Video with five to buy on Google Play.

Bristol-based Ricky Martin, aka the Art Ninja, can offer 40 episodes worth of art classes for the home-schooling parent and their protégé.

Each show has a theme and consists of lots of short makes, including some done in under a minute. The idea is to do things quickly and easily with lots of bang for your buck, making art into a bit of fun rather than projects to labour over.

Twins – and actual doctors – Dr Chris and Dr Xand van Tulleken have amassed a whole 94 episodes worth of top-notch experiments, facts and giggles about the human body.

The pair follow paediatric Accident and Emergency personnel and patients at working hospitals in Manchester, Liverpool and the West Midlands, and have managed to create one of the very best pieces of educational TV out there. Dig in.

This utterly mind-blowing and beautifully shot TV show is guaranteed inspiration for any older student interested in design. Each episode follows a top designer in their field (and there are only 16 of them so far so make sure to ration them). They include a graphic designer, illustrator, photographer, automotive designer and a Nike shoe designer. It'll wow your kids and make you feel like you've failed at life.

A superb watch for adults and older children alike, these brilliantly-produced short documentaries make a fascinating and grown-up entry point into society. Each of the 30 episodes covers a topic of the zeitgeist, which is guaranteed to make the viewer think twice about popular culture and their behaviour as an individual within it.

Themes include eSports, cryptocurrency, cloning, the racial wealth gap and why women are paid less. You may wish to avoid the ones about weed and the female orgasm if you're watching with younger viewers.

There are few finer examples of the short story form than those of the original Twilight Zone. Begin by discussing what a short story is all about and then watch any of the over 100 episodes,  find out what it is about human nature they're getting at and if, and why, they work.

Don't miss Nightmare at 20,000 Feet with William Shatner, or Eye of the Beholder. When you're done with those, try the 19-disc set of the Tales of the Unexpected on DVD.

Not exactly a TV show, but Joe Wicks, known as The Body Coach, is one of YouTube's many fitness stars who are promising to become your kid's new PE teacher.

Don't be put off by the abs: Wicks is going to keep things basic for his 9am live sessions which are focused on getting your kids moving, feeling energised, positive, and optimistic. Expect routines aimed at pre-schoolers all the way up to secondary. Adults can get in on the action too – if they don't mind embarrassing themselves.