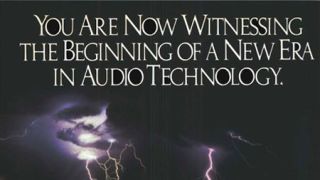 On 11th November, 1920, the coffin of the Unknown Warrior was buried at Westminster Abbey in London. It was a symbolic act to mark Armistice Day, the day on which, two years earlier, the Great War had ended. The unknown soldier’s coffin was intended to commemorate all the soldiers who had died in the hostilities. Crowds lined the streets as the carriage carrying the coffin made its way to Westminster Abbey, with the nation captivated by the occasion.

The significance of the event saw special permission given to make an audio recording of the service. Lionel Guest and Horace O. Merriman used four carbon telephone microphones placed in the Abbey to make the recording, which became the first electrical recording ever to be sold to the public. And while it’s widely agreed the 12-inch disc, which contained Recessional by Rudyard Kipling and the hymn Abide with Me, was, ironically, of no great sonic quality, it marked a key milestone in the history of recorded music and the pursuit of hi-fidelity sound.

On 29th April 1925, Leopold Stokowski and the Philadelphia Orchestra made the world's first electrical recording of a symphony orchestra. The system used, known as the Western Electric, was soon adopted by major record labels, increasing the reproducible frequency range, allowing audio engineers to capture a far more detailed sound and greatly improving the quality of recordings.

From magnetic tape to polyvinyl plastic vinyl, the 4-track cartridge to cassette tapes and compact discs, the recorded audio industry moved at a steady pace in the pursuit of better-sounding and, crucially, more accessible formats. And with them came a golden age for hi-fi, as people eagerly filled their living rooms with turntables and records.

Fast forward, and if the 1970s were perhaps hi-fi’s heyday, then the 2000s were, well, a transitional stage. The pursuit of accessibility triumphed at the start of this millennium, thanks to the age of MP3 and AAC, iTunes and iPods. And while the effect on how we discover, pay for and listen to music has been tremendous, sound quality was initially left behind as an afterthought. And that negative perception has haunted digital music ever since.

But 2020 is not 2000, and the good news is digital music, and the hardware to play it, has come a long way in the last 20 years. You no longer need to make the choice between convenience and quality; you really can have both.

Not only has digital music clawed its way back to parity, it’s taken the ball and run with it, delivering better-than-CD-quality audio, all available to stream or download.

Initially via download websites such as HDTracks, hi-res audio is now available on streaming services such as Tidal, the latter giving you a world of CD-quality or better music for a monthly payment hardly larger than what you would have recently spent on a single album.

We may have been bowled over by 128kbps AAC files on iTunes and iPods with 5GB of storage capacity back in 2001, but they now seem positively archaic. Thanks to superior codecs, such as MQA, faster internet speeds and more affordable storage, whether you want to download or stream, play at home or on the move, you really can listen to music in arguably better-than-ever quality in 2020. And, of course, you can still buy it in all its physical glory, too – probably even on a better-sounding vinyl press.

So while hi-fi may conjure images of stacks of equipment playing vinyl, cassette tapes or compact discs, a high-resolution audio file should in fact deliver a more accurate, ‘as the artist intended’ performance, than we’ve ever had access to. Whisper it in some quarters, but you can even listen to hi-res audio on your phone. Smartphones as hi-fi sources? Who would have thought it.

With plenty of streaming services now offering a premium sound quality tier - do keep up, Apple Music and Spotify - the final hurdle remains convincing people of the merits of a sound system that’s doing the music justice. At the entry-level that might just be selecting that premium tier and spending enough on headphones, or, further up the food chain, realising the merits of stereo speakers with dedicated components. And, in making that decision, you ensure you hear the music you love sound as good as it can. That is, after all, what hi-fi is really all about.

While the basic functionality of the humble loudspeaker has barely changed in the last 100 years, how and where we listen to music has changed immeasurably. At the start of the last decade that change might have meant relegating sound quality some way down the wishlist - beneath form, function and features - but that is simply no longer the case.

Hi-res portable music players have replaced Walkmans, music streamers sit where CD players once did, and a smartphone and a pair of speakers can now equal a hi-fi system but, most crucially, delivering high-quality sound - higher than that of the 1970s hi-fi heyday - is now within everyone’s reach.

Music in high-quality formats has never been more accessible and, thanks to the rapid evolution of consumer electronics, it’s never been easier to have an equally capable portable or home music system. Here’s to the next 100 years of hi-fi.