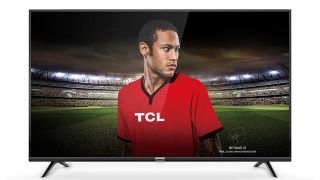 TCL has built a reputation for making an abundance of affordable TVs. In 2017, the Chinese brand became the third-biggest brand in North America, and its LCD TV sales are, according to the company, growing rapidly year-on-year as they become increasingly available in the UK and other European countries.

TCL TVs might be affordable, but they don't scrimp on premium features – you'll see a few models with Dolby Vision HDR support, for example.

With prices starting often significantly below those offered by the likes of Samsung, Sony and LG, it's no wonder people are tempted. But are TCL TVs any good? And should you buy one if you spot a good deal? We've run the rule over all the TCL TVs on the market in the UK and US, and found the best deals.

Short answer: If your priority is screen size and pixels-per-pound, these TCL TVs are certainly worth considering - especially if you don't own a video streamer and want a TV with a fair share of smart apps built into it, which is exactly what Freeview Play and Roku TV offer (they're both built into a number of TCL TVs).

Features: tick. But what about picture quality? As these TCL TVs are so new to the UK market, we haven't gone twelve rounds with any. However, if their specs, and our experience of cheap 4K TVs are anything to go by, we'd temper expectations when it comes to ultimate 4K HDR performance.

For daytime TV and HD/SD streams, these TVs will likely be perfectly fine. However, those after the true splendour of 4K HDR content, from a 4K Blu-ray player, for example, might be better served by a more premium offering.

TCL TVs in the UK

With Google Home and Google Assistant onboard, both can be controlled through selected Google devices such as Google Home Mini, Nest, Android OS mobile phones and TCL Google-enabled remote controls.

With 4K resolution, HDR10 and Hybrid Log Gamma (HLG) support, as well as Freeview Play offering catch-up, on-demand services and live TV together in one place with no monthly costs, these TCL TV ranges are as feature-packed as you could hope for at the budget end of the market.

There are Netflix and YouTube apps for 4K content and various apps that can be installed for SD and HD content. It's not clear whether Amazon Prime Video is available on TCL's TV offering - if it isn't, users of that video streaming service would have to get it through a budget video streamer, such as a Google Chromecast or Amazon Fire TV 4K Stick.

The DP648 models deliver TCL's Wide Colour Gamut and Brightness+ processing over the DP608 range, but brightness levels still max out at 320 nits, so these TVs might not make the most of HDR content. Again, at this price you perhaps shouldn't expect them to, but it does mean we wouldn't rush to pair them with a 4K Blu-ray player. If you did want to, all the sets' HDMI inputs are compatible with 4K passthrough from connected 4K sources.

TCL 50DP628 50in 4K TV £329 at Amazon
A larger version of the TV above, this 50in TCL telly matches its smaller sibling for support and features. And it fills a void for those people wanting a 50-inch budget TCL TV.View Deal

TCL 65DP628 65in 4K TV £549 at Amazon
A larger version of the TV above, this 65in TCL telly matches its smaller sibling for support and features. And it fills a void for those people wanting a 65-inch budget TCL TV.View Deal

TCL DP648 4K TV at Amazon
55in: £571|65in: £847
This is the 'premium' budget TCL 4K TV, the P648 Series, and probably the best deal around right now. It adds HDR Pro and Wide Colour Gamut into the mix along with an Ultra Slim Metal Design. There's still Dolby Audio and all the Smart TV features. View Deal

MORE: The best UK TV deals on the market

TCL has five core TV ranges in the US, offering televisions in size from 28 inches all the way up to 75 inches. So how do the different TCL TVs compare? And which one should you go for? Let's take a look.

The 1-Series (D100) is a basic HD TV with no Smart TV functionality or internet connectivity. It's an LED TV, as all TCL TVs are, with a 60Hz refresh rate. You get three HDMI inputs and a USB 2.0 connection, a 60Hz refresh rate, digital optical and analog RCA outputs, and TCL's standard remote.

Step up to the TCL 5-Series (S515, S517) and you get all of the above, in the same screen sizes, but with a few extra features. There's support for Dolby Vision, as well as HDR10, an HDR Dynamic Contrast mode, Wide Color Gamut support, and the addition of an enhanced remote with voice control alongside the Easy-to-use remote. The TCL 55S517 is one of the most popular sets in this range.

At the top of the pile you'll find the TCL 6-Series (R615, R617). Available in 55in, 65in and 75in screen sizes, it has all the above features and functions, but adds "Contrast Control Zones", which we know as local dimming, with the number of zones - up to 160 - dependent on the size of screen you choose. The TCL 55R617 is the most popular model in this series.

TCL 50S425 4K Roku Smart LED TV $270 at Best Buy
Save on this 4-Series TCL TV at Best Buy right now and get the added benefit of 4K resolution, HDR10 support and HDMI ARC. You still get all the same Smart TV apps.View Deal

The best US TV deals on the market

How to choose the right TV