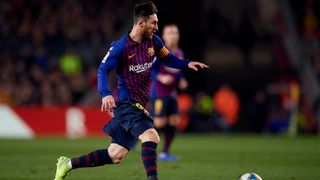 Barcelona travel to Valladolid knowing there's plenty of work to do if they're to retain their Spanish league crown. Barça find themselves four points behind Real Madrid as they kick off at 6.30pm BST.

And with only three games left of their season, it seems almost certain the reigning champions will have no room for maneuver as they wait for Zinedine Zidane's side to slip up.

They do at least have a favourable run in, with all three opponents in the bottom half of the table, beginning with Real Valladolid this weekend.

The hosts are all but safe from relegation in 14th place, despite having won only eight of their 35 matches so far this season. Barça's biggest worry, however, will be Valladolid's record of 15 draws, which is a league high.

Real Valladolid vs Barcelona kicks off at 6.30pm BST. UK viewers can watch on the LaLigaTV channel through Premier Sports. Those in the States will need BeIn Sports.

Premier Sports has the rights to show Valladolid vs Barcelona in the UK and Ireland in conjunction with LaLigaTV. Football fans can subscribe to the LaLigaTV channel through Premier Sports on Virgin Media (£9.99), Sky Sports (£5.99) or by using the Premier Player web player (£5.99).

Barcelona vs Espanyol free on Premier Sports
Follow the link to sign up to LaLigaTV. Access all the games in HD through your Sky box, on Virgin Media or using the Premier Player web player.View Deal

LaLiga TV can be found on Virgin Media in HD on channel 554. It's available to all Premier Sports customers and any Virgin Media subscriber can sign up for £9.99 per month through their on-screen service - Home > Apps & Games > All Apps > TV Channel Upgrades on the remote. The bundle includes Premier Sports 1 HD (CH 551) and Premier Sports 2 HD (CH 552) as well.

Home also to Italy's Serie A, a Premier Sports package is available to Sky TV customers for £9.99 per month, including LaLiga TV plus the two Premier Sports channels as well.

Watch Real Valladolid vs Barcelona from abroad using a VPN

UK citizens away from home or stuck abroad will need a VPN to access the free Premier Sports live streams from outside the UK. The service will know your location based on your IP address, and will automatically block your access – even if you’re a UK national.

Watch Real Valladolid vs Barcelona in the USA

Rights to show Real Valladolid vs Barcelona in the US – alongside coverage of France's Ligue 1 and UEFA cup competitions – belong to beIN Sports. It is quite easily bolted on to your existing cable package and includes the Connect service for watching games live on your smartphone, tablet, laptop or Roku box.