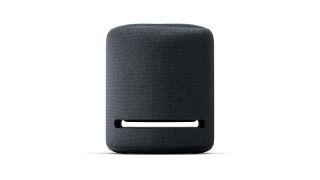 Smart speakers are getting better and better. While some of the first models out of the blocks promised a lot but didn't quite deliver, today's units are not only smarter, but they've improved in the sonic stakes too.

Enter the Amazon Echo Studio, which Amazon claims is its best-sounding Echo speaker yet. Its selling points? Good sound quality, support for 3D audio and, of course, Alexa built-in.

The question is, how does it fare against one of the established market leaders, in this case, the similarly priced Sonos One?

The Sonos One is one of the best smart speakers around for the money. It connects wirelessly to the rest of the Sonos family, supports Apple AirPlay 2, and has both Amazon Alexa and Google Assistant voice assistants built-in. It sounds pretty good for the money too.

But is it better than the Echo Studio or does the newbie knock it off its perch? Let's find out.

The Sonos One looks a little boxier than the Amazon Echo Studio. It's also smaller and looks virtually identical to its predecessor, the Play:1.

On top of the One is a touch-sensitive panel with symbols that you use for play/pause, to activate the microphone and the device's context-sensitive actions. There's also a circle of tiny white LEDs that indicate whether voice control is switched on.

Tap the microphone symbol, and voice control is switched off, protecting your privacy. Simple.

There's also a dedicated pairing button, just above the Ethernet port on the rear.

The Amazon Echo Studio is an altogether more imposing proposition. It's cylindrical, and stands a lot taller than the Sonos One, clad in a charcoal-coloured fabric mesh. Like the One, the top houses the controls, including physical volume buttons, a mic button and one to wake Alexa. As with previous Echos, a blue light ring lets you know that Alexa is listening.

It boasts more internal speakers too, including an upward-firing driver hidden under the surface of the Echo Studio. It's there to help give more of an impression of height and work with 3D audio tracks encoded in Dolby Atmos and Sony 360 Reality Audio.

There's not a lot to choose between them - the Sonos One is more compact and has a slightly more modern feel, while the Echo Studio gives the impression you're getting a lot of smart speaker for your money and has been designed with 3D audio in mind.

Given their smart speaker status, one of their big sells is having a virtual assistant built-in. But, while the Sonos One supports both Amazon Alexa and Google Assistant, the Echo Studio is limited to just Amazon's Alexa. Score one for Sonos.

However, the Echo Studio has plenty of features besides. It supports Dolby Atmos Music. The benefit? Tracks are mixed with a greater level of precision, giving greater control over different sound elements within the soundfield. In other words, 3D audio that claims a more immersive listen. The Echo Studio also supports Sony 360 Reality Audio, which is another format of 3D audio. The downside is that you'll need a subscription to Amazon Music HD to take advantage of this feature.

Those wondering which music streaming services it supports will be pleased to know that Apple Music, Amazon Music (naturally), Spotify, Deezer and TuneIn are all included.

The Echo Studio has auto-calibration tech which allows it to tune its sound to your particular room characteristics. There are tone controls inside the Alexa smartphone app, as well as the ability to change volume and pair and control any other Alexa-enabled speakers you own.

Speaking of pairing, you can wirelessly sync the Echo Studio with an Amazon Fire TV Cube, Fire TV or Fire TV Stick to create a Dolby Atmos home theatre set-up. It might not be 5.1 surround sound, but it's a definite upgrade on most TV's audio abilities.

So what of the Sonos One?

Spotify, Deezer, Tidal, TuneIn and Audible all come supporting voice controls out of the box, as does Amazon Music. In fact, the Sonos One supports a much wider range of services full stop. The One chimes when it acknowledges a spoken request, which we find a little more natural than the Echo Studio. We also found its microphones to be excellent at picking out your voice in a noisy environment.

The One can double up as a surround sound speaker for a Sonos Beam or Sonos Arc-based system, and it plays nice with the Sonos Amp. It's also compatible with Amazon's Echo speakers.

The One has Apple AirPlay 2 wireless tech too, which is one over the Echo Studio. Overall, it's slightly better stacked in the features department.

The all-important question: which sounds better?

On paper and in the flesh, the Echo Studio certainly looks impressive. It's bigger, boasts more speakers and supports 3D audio through Amazon Music HD. And in practice, it produces an airy, open sound with clear, precise vocals with a fine sense of height and space. Some 3D tracks promote an impressive spread of sound but others sound a little messy and disorganised.

Our biggest reservation is over the quality of bass. While the Echo Studio delivers power and weight, it can be a little overbearing. That's not much of an issue if club bangers are your thing, but for anything more subtle, it can impact the listening experience.

The Sonos One sounds better. It produces a weighty, full-bodied, and focused sound that belies the speaker's diminutive dimensions. But it doesn't sacrifice detail - the soundstage is spacious and well organised, with each element given plenty of room to breathe.

Bass is deep and solid, and the treble clear and sparkly. Overall, it sounds more composed than the Echo Studio, with a more cohesive sound and more refined bass. It might not have 3D audio and doesn't go as loud, but it's an altogether more balanced listen.

It's a close-run thing. Unfortunately, the Echo Studio doesn't quite live up to its claim of being an Echo speaker for audiophiles, but it's a solid option at the money. It has good dynamics, goes loud and picks out plenty of detail. It's really the bass that just trips it up.

Our money would go on the Sonos One, though. It allows you to stream from more services, supports both Alexa and Google Assistant and, more importantly, it sounds better.

Read the full review: Sonos One