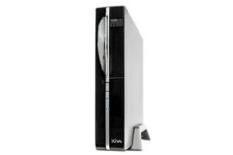 The musicm8’s a premium NAS, but it’s brilliantly easy to live with

If you're interested in using a music server or streaming device, the new XiVa musicm8 could be just what you're looking for.

A sophisticated NAS box with built-in disc-ripping, it's small, very quiet (though not quite silent) and, with 1TB of storage, there's plenty of hard-disk space to store music, photos and video.

Usability justifies price
That said, you'll easily find a media centre PC for the same money, while simpler NAS drives start at £400. So why does the musicm8 cost £800?

Simple: because the XiVA just does what it ought straight out of the box, with no fuss. It has full iTunes support, grabs its own album art and is pre-configured to support many popular devices, such as Squeezebox, Sonos, Linn, Wii, PS3 and Xbox 360.

It's Mac, Windows and Linux-compatible, and rips music into WAV, Flac or MP3. Throw in remote online access and you've a properly thought-out, effective product.