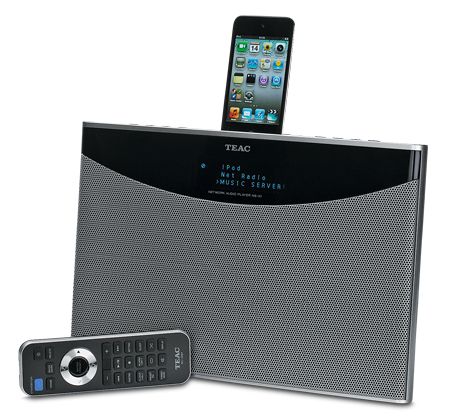 The TEAC NS-X1 is a stylish, versatile and reasonable-sounding system, but a shade too costly

It’s almost a given these days that we expect iPod dock devices like the TEAC NS-X1 to do everything except the washing up, but most inevitably have one or two holes in their spec.

Not so this TEAC: it’s a dock for your Apple device, has FM and internet radio tuners and will also stream files across your network from a NAS drive. It’s also an Apple AirPlay streamer.

TEAC NS-X1: Design and build
The NS-X1 clearly takes its design cues from Bose’s SoundDock, but pick it up and first impressions are of a slightly plasticky facsimile.

That evaporates, however, when it’s put in situ (you can also wall-mount it for a super-sleek look), and you handle the weighty remote.

The three-line display is easy enough to read up close, but you might have a bit of trouble from across the room.

Likewise, for all its heft, the remote is sluggish to use – not great when you’re trawling through thousands of internet radio stations.

TEAC NS-X1: Sound quality
In use, the NS-X1 is largely enjoyable to listen to. There’s decent detail, and dynamics are more than acceptable. It lacks bass weight though, which is surprising given its size, and the sound can be woolly at times.

True, you can smooth some of this out using one of the EQ presets, but we’d still like a shade more punch.

Still, wireless music streaming and AirPlay support are the obvious draws here (you can connect the TEAC to your network via ethernet or wi-fi), and the NS-X1 performs well with both – helped in no small part by its wide format support.

VerdictOverall, our key grumble with the TEAC is its high price. For only £50 more, you can bag the Ruark Audio R2i which, while not as flexible, sounds considerably better.

That said, if you can find the NS-X1 for less than £200, it’s well worth your consideration.