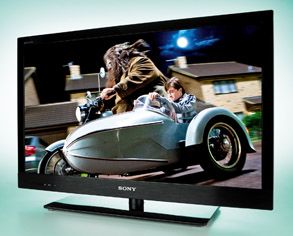 Sony is master of the myriad model launch. The CX range is the entry-level series for 2011 – though from the styling you’d be forgiven for being unsure.

It says a lot that this chassis, thicker and more cumbersome than the most, it had some staff here asking whether it was definitely a new model. If it’s style you’re after, this isn’t the one.

A bit of a hefty beast
Part of this relative bulk can be explained by the backlight. It’s not an LED screen, instead using a traditional CCFL (cold cathode fluorescent lamp) backlight to bring the LCD panel to life.

This tech requires more space compared with tiny LEDs (and also uses more power). Claimed contrast levels are different too, with the KDL-32CX523’s dynamic contrast being described as ‘high’ on Sony’s spec sheet, as opposed to ‘mega’ on the EX Series.

Yes, really. Marketing guff aside, you’ll have to make do with a stand that doesn’t tilt like the Sony KDL-32EX524, and a slightly different remote control.

Plenty of the same features and functions are here, however: Freeview HD, four HDMI inputs, Bravia Internet Video and USB recording, to take a handful.

Slick Xross Media Bar interface
Sony’s new Xross Media Bar-derived user interface is also here, and we think once you familiarise yourself with the way it works, it’s a subtle upgrade – not least as you can easier keep an eye on what you’re watching thanks to picture-in-picture.

Without wanting to labour the comparison, the picture character is similar on both these sets, but this less-expensive model gives a little away in places. For the lower price, though, there’s plenty to like.

Broadcast TV proves clean and easy to watch thanks to a relaxed colour palette that trades dynamic excitement for subtlety. It’s a little softer than the best here, but decent nonetheless.

Switch to disc-based stuff and we can’t help thinking the Sony could do with a kick up its chunky backside.

Bright colours aren’t bright enough, whites don’t look too crisp and clean… it’s as if there’s a layer across the screen that can’t quite be removed, no matter how we adjust the picture processing or attempt to boost the brightness, backlight or contrast.

The Qriocity service isn’t working at the time of writing, but our previous experiences have been positive: impressive picture performance, not least from HD content.

Sonically the CX523 is better than your average, too, avoiding harshness with a well-rounded delivery.

This set will almost certainly be available even cheaper – and it’s one of the best budget options, not least if the streaming appeals. But it’s not quite the all-conquering Sony we expected.