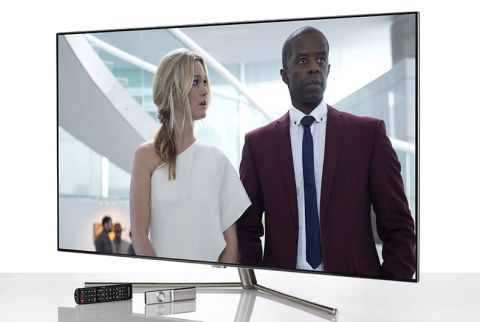 Here it is, finally: the first Samsung QLED to go up against an OLED at the same size. In fact, we’re really considering this, the QE55Q7F, against three OLEDs – the LG OLED55B7V, Sony KD-55A1 and Panasonic TX-55EZ952B.

The LG is the real rival here, though, because it’s better than the Panasonic and significantly more affordable than the Sony. And it’s built by LG, the progenitors of modern OLED and Samsung’s arch rival.

There’s still £700 between the asking prices of the LG B7 and Samsung Q7F, though, not to mention fundamental differences in the underlying telly tech.

Does that make this test a mismatch? Absolutely not. Samsung is very much pitching QLED against OLED and, while OLED is very much the hot new thing in TV-land, there are still some things that old man LCD can do better.

MORE: What is OLED? The tech, the benefits

The biggest advantage an LCD TV with LED backlighting has over an OLED TV is brightness, so it’s little wonder this is the most striking difference between the Q7F and the LG B7.

Play Fantastic Beasts on both sets and the alternative approaches are immediately apparent, with the film’s logo emerging far more brightly from the murky background when viewed on the Samsung.

It appears to be made of some sort of metallic material, and it sparkles and shines in the light. It’s extremely sharply defined, too, which gives the logo greater solidity and depth than it gets from the LG.

But what’s also made clear here, is that in order for the Samsung to achieve these prodigious levels of punch the TV needs to raise its backlight, which means that the depth of the blacks elsewhere in the image is sacrificed.

This is an unavoidable characteristic of TVs with backlights - particularly those that are edge-lit, as this Samsung is.

MORE: Fantastic Beasts and Where to Find Them - Blu-ray review

To get light to a bright object in the centre of the screen the LEDs have to go brighter, which means brightness across the whole panel increases - including in the black bars you get at the top and bottom when watching a movie. You’ll even occasionally notice these change shade as the backlight raises and lowers.

In fairness to Samsung, the Q7F implements its backlight effectively, inasmuch as blacks aren’t sacrificed nearly as much as they are on many rival LCD sets. And there’s none of the clouding often associated with backlit TVs.

The fact remains, though, that an OLED lights each pixel individually so there’s no sacrifice to black depth, regardless of how bright the rest of the on-screen action is supposed to be.

But the Samsung counters this DNA-level weakness with some serious strengths. We’ve already discussed brightness, but it’s worth reiterating: the Q7F delivers punch far beyond what even the Sony A1 can muster, and that’s especially evident when you play HDR content (the set supports HDR10 and HLG).

The march of the red crabs in Planet Earth II is a visceral treat, as the thousands of bright red crustaceans stand out vividly against the dirt of the forest floor and the occasional shock of vibrant green foliage. For eye-pleasing vibrancy and visual fireworks, this is hard to beat.

The Q7F isn’t all about brightness, either, because it also serves up an exceptionally sharp and detailed image.

Individual hairs, different clothing materials and every crease in a shirt are all brought to the fore by the crisp definition offered here. Characters and objects in the foreground stand out clearly and solidly against backgrounds, and vistas have palpable depth and scale.

There is a sense the TV is imposing a little of its own character to proceedings by actively enhancing images, particularly when you’re watching non-4K content, but there’s no denying the spectacle on offer. This may not be the most authentic version of whatever you’re watching, but it sure is an exciting one.

And that’s not to say things are overblown, as such. The Q7F certainly prioritises vibrancy and punch, but not at the expense of subtleties such as skin tone, which is surprisingly nuanced and nicely judged.

Avoid sitting off-axis, though, colours fade and blacks grey quickly. This is not the TV to buy if you regularly have family or friends watching from all corners of the room.

Motion is handled pretty well, although the Samsung isn’t as naturally smooth as the LG B7, nor possessed of a Sony A1-like Goldilocks setting that perfectly balances crispness and realism.

You’ll try turning the motion processing off entirely and giving Custom mode a go with some subtle changes, but perfection remains tantalisingly out of reach.

We’ve only really mentioned 4K and 1080p so far, but the TV’s punchy, vibrant characteristics come through even when watching standard-def via one of the tuners (Freeview and satellite are available) or a DVD.

There’s a fair bit of fuzz when you get to images at these low resolutions, and both LG and Panasonic clean this up more effectively, but it certainly isn’t terrible.

The Q7F is also excellent as a games monitor, with that awesome brightness and vibrancy lending itself nicely to computer-generated graphics, and an impressively low input lag of 23.8ms when in Game Mode ensuring the screen never slows you down.

Samsung has done a good job this year of simplifying its picture calibration settings, but there is still some work involved in getting the screen looking its best.

As is so often the case, you should start by switching the Eco settings off, as they have a detrimental effect on image quality. You should also experiment with the motion processing options - personal preference is the overriding factor here.

We find switching Colour Temperature to Cool and changing the Colour setting towards a slight green bias helps balance the vibrancy and realism of the picture. Taking a few points off the Sharpness setting helps rein in the set’s desire to over-enhance edges. We’d also recommend turning the Contrast Enhancer off, as this tends to crush black detail.

If you apply these tweaks to the Standard mode, they will be active whenever you watch SDR content. But when the Q7F senses an incoming HDR signal it switches to an HDR set of presets that won’t take into account any of your changes.

The good news is the default HDR mode is pretty good, really only requiring that you change the Colour Temperature and motion processing settings.

You’ll notice that here the Contrast Enhancer and Local Dimming options are at their maximums, but for HDR content they work.

There are a number of options available in the Samsung’s sound menus but by and large you’re best served by the Standard mode. This provides a full-bodied, weighty and relatively well-projected soundstage by prevailing standards.

The LG B7 is a little more crisp and detailed in its delivery, but you’d have to go further up the LG OLED range or opt for the Sony A1 to get a flatscreen that sounds significantly better.

Even so, we would recommend partnering the TV with a separate sound system. These powerfully punchy pictures really deserve equally punchy audio.

There’s no getting around the fact the Samsung Q7F looks unspectacular next to the super-slim panels of the OLED crowd, but that isn’t to say it’s not a smart-looking set in its own right.

The impressively thin bezel leaves you feeling almost as if all you can see from the front is screen and, at 45mm from front to back, it’s slim by the standards of backlit TVs. This is at least in part thanks to all the connections being housed in an external One Connect box.

This year’s One Connect is bigger than last year’s and, for the first time, requires its own power connection. You’re going to need to have two mains sockets available if you want your QLED to produce a picture.

The cable connecting screen and box has been updated too, and is now so thin as to be almost invisible from across a room. It’s 5m long, so you can hide the One Connect box and leave the display looking very neat, uncluttered and stylish.

Talking of neat, uncluttered and stylish, those are also traits of both Samsung’s current TV operating system and the sleek silver remote control that comes bundled with the Q7F and its QLED brethren. In tandem, they create a user-experience that’s slick and snappy, and gets you to the content you’re after quickly.

You might find yourself occasionally using the remote's built-in microphone for issuing voice commands. Certainly it’s the quickest way to activate Game mode. There is a plain old plastic zapper if you prefer, too, but we suspect you’ll choose to hide that away and keep it as backup.

When it comes to content, there’s certainly plenty of it, with Netflix and Amazon taking centre-stage and the usual array of catch-up services ensuring you never need miss another episode of Have I Got News For You or even Love Island. Unlike many rivals, the Samsung also includes Now TV in the mix, giving you a route to Sky content without the need for a dish or contract.

Best of all, a bug that meant HDR content from Amazon and Netflix wasn't being identified or displayed correctly at the initial time of testing has now been dealt with, which means the likes of Bosch, Daverdevil, Bloodline and The Man in the High Castle all now look every bit as stunning as they should.

That Netflix/Amazon HDR bug cost the Q7F a five-star verdict when it was initially reviewed, but with the latest software Samsung has removed the issue and the TV is now performing at its impressive best.

It should come as no surprise at all to discover it offers a completely different picture to its OLED rivals. What might be a bit of a surprise is quite how compelling that offering is.

This is a TV that maximises the inherent qualities of LCD/LED technology and combines them with Samsung’s world-renowned processing smarts to produce a picture that’s endlessly vibrant, dynamic and crisply defined. It’s a real thrill to watch.

That isn't to say its without limitations - most notably in its blacks, which are inevitably compromised at times. Motion is a little flawed, too, and there’s that nagging sense that what you’re watching has been turned up to 11 and isn’t necessarily truly authentic.

Ultimately, the more natural, uncompromised picture of the LG B7 makes it our preferred choice even now that the Samsung’s performing as it should, but there’s much to be said for the markedly different charms of the Q7F. Particularly at the significantly more affordable price.