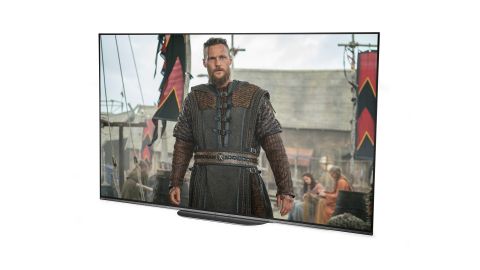 The A9G delivers on its promise of authenticity, but a couple of picture niggles hold it back from dream TV status

Authenticity is the name of the game with Sony’s Master Series TVs, which currently, consist of an 8K LCD model and this 4K OLED. Authenticity is very much what we’re looking for in everything we test, too. We want a piece of kit, whether it’s a speaker, pair of headphones or TV, to deliver content as close to the creator’s intention as possible.

So why does the Sony A9G, here reviewed in 55in guise, not get the full five stars? A combination of comparatively high price and the occasional picture niggle holds it back. And that’s a real shame because, in some ways, this is an utterly brilliant TV.

The A9G is the successor to 2018’s A9F and the iconic A1 before it, but it eschews the easel-like design of those models for a more typical pedestal design. That's a shame in some ways, but this is a significantly lighter and slimmer TV than its predecessors, making it better suited to wall-mounting. The combination of very thin bezels and an exceptionally low-profile stand mean it’s more compact than most 55in rivals, too.

Sony has also put some real thought into the rear of the set, with a series of patterned panels acting as decoration and hiding the set’s connections and the cables running to them.

Those connections include four HDMI sockets that, while not officially 2.1-certified, are claimed to meet the specification. On top of that, there are three USB sockets, optical and headphone outputs, and a somewhat incongruous pair of speaker terminals so that the TV can take the place of the centre speaker in a surround sound package.

Sony has been using the Android TV operating system on its TVs for a while, and the A9G gets the 8.0 ‘Oreo’ version out of the box, although the update to 9.0 ‘Pie’ is imminent. Version 8.0 of Android TV is already a big improvement on previous iterations in terms of usability and presentation and we expect 9.0 to take things further, but we’d be surprised if it manages to close the sizeable gap between Android TV and the bespoke operating systems built into Samsung and LG TVs.

Android TV is certainly well appointed in terms of streaming apps. Netflix and Amazon Prime Video are both on board, in 4K and with Dolby Vision HDR on applicable content, as are Hulu, HBO Now and Showtime Anytime.

The excellent Apple TV app, which is beginning to appear on non-Apple products, including Samsung TVs, is missing, but Google Play Movies & TV, while not quite on the same level, gives you pay-as-you-go access to films in 4K and HDR.

Anyone with lots of locally stored video and music files will appreciate the presence of Plex and VLC, and Spotify and Tidal are on board for those who want to stream music to their TV.

In terms of HDR, the A9G supports HDR10, HLG and Dolby Vision, but not HDR10+. It's clearly a shame that Sony doesn’t support all formats when the likes of Panasonic and Philips do, but the truth is that it is easy to live without HDR10+ and that Dolby Vision is of far greater value, at least for the time being.

Sony has also gone beyond its rivals by including Netflix Calibrated Mode and IMAX Enhanced in the A9G’s repertoire, but we’re unimpressed by the former and the latter is far from readily available at this point.

At the heart of the A9G is the X1 Ultimate chip that Sony introduced in 2018 and which has been tweaked for use in the A9G and its Master Series sibling, the 8K Z9G. The X1 Ultimate brings with it a number of picture-enhancing features, including Object-Based Super Resolution and Object-Based HDR Remaster, which use a huge database of images and intelligent processing to boost the definition and contrast of specific objects in an image.

The A9G also gets what Sony calls ‘Pixel Contrast Booster’, a panel controller that is said to maximise dynamic range and increase detail and texture.

We’re now used to Sony TVs performing at close to their best right out of the box, which makes it a real surprise that the A9G is initially such a dull performer. Thankfully, it is possible to get a cracking picture out of it, but it’s tricky to do so.

As with its 65in sibling, we find that the best performance is achieved by selecting the Standard mode with Black Adjust switched off, Advanced Contrast Enhancer and Live Colour pumped up to High, Reality Creation, both noise reduction options and Smooth Gradation switched off, a few points added to Black Level and a few taken off Colour. The resulting picture isn’t perfect, but we believe this is the A9G at its best.

Certainly, when we fire up Guardians Of The Galaxy Vol.2 on 4K Blu-ray we’re delighted by the authentic performance, with the typically deep blacks offered by OLED panels combining with more dark detail than we’re used to and a fabulously natural and convincing colour balance – no one does colours more accurately than this. Skin tones, in particular, are organic in overall hue and terrifically nuanced in shading. This is also an exceptionally detailed picture that leaves nothing to the imagination. It’s supremely sharp, but avoids falling into the trap of being over-processed.

Sony has long been the master of motion, and once again proves itself so with the A9G. While the LG C9 and Samsung Q90R force you to choose between blur and an overly-processed image, the A9G strikes a balance that keeps motion sharp and smooth, without adding obvious shimmer or the soap opera effect.

The best thing about great motion processing is that you’re not aware of any processing actually taking place, but some of the A9G’s other processing is, disappointingly, less discreet. During the scene in High Priestess Ayesha’s throne room we occasionally notice a brightening and dimming of the panel, which we believe to be the Pixel Contrast Booster at work.

It’s an issue because it makes some scenes entirely dim when there should be bright, punchy highlights, but also because the moment you start noticing the processing, you’re distracted from the film or TV show you’re watching. That alone will be enough to put some people off the A9G.

It’s also fair to say that the A9G doesn’t make the most of an HDR signal in the way that its rivals do. The LG OLED55C9PUA, with which it shares its OLED panel, is that bit crisper and capable of producing more pronounced highlights, particularly in dark scenes, while the Panasonic TX-55GZ2000B is even better in these regards.

However, switch to a 1080p Blu-ray and the A9G is second to none. There’s no HDR to undersell here, and the Sony absolutely makes the most of any SDR signal it’s sent. Our Fargo disc looks lovely, with a pitch-perfect balance, beautiful colours, crisply defined edges and lots of detail. That detail carries through to even the darkest parts of the picture, ensuring that all of the film’s moody drama remains intact.

Drop down to 576p and, while the picture is inevitably less exceptional, it is at least as clean and controlled as that produced by an LG OLED and is also a little more vibrant. If you still watch DVDs, the A9G is overkill of the best possible kind.

Sony’s Acoustic Surface technology, introduced with the A1, sees traditional drivers replaced with small actuators that vibrate the panel, essentially turning the entire screen into a speaker.

The A9G’s predecessor, the A9F, had what was essentially a 3.2 ‘speaker’ arrangement, but for the A9G the centre channel has been dropped. That might sound like a retrograde step, but switching from circular to ovular actuators has helped to create a wider, more dispersive soundstage with better stereo separation, all without compromising directness and clarity.

Sure enough, there’s a good spread of sound that combines with a directness and AV synchronicity that rivals can’t match, as well as a rewarding degree of solidity and weight.

That said, more acoustically accomplished TVs are appearing, and the Sony A9G isn’t automatically the audio king it was when we reviewed the 65in version back in June. It’s still a cut above most, but rivals such as the Panasonic GZ2000 prove that Sony isn’t the only company capable of producing impressive-sounding televisions.

One thing that Sony does that others don’t is allow its TV to act as the centre speaker in a traditional surround sound package. It’s an ingenious, unique offering that can save on speaker clutter, but if you’re serious enough about audio quality to install a surround package, you should stick with a traditional centre speaker. As good as the A9G sounds, it’s no match for a proper loudspeaker.

In some ways the Sony XBR-55A9G is a brilliant TV, delivering on its promised authenticity particularly in terms of colours, detail and motion handling, and providing one of the best audio performances of any TV you can currently buy.

But it falls a little short of perfect, with LG’s 2019 OLEDs and Panasonic’s GZ2000 model (and Samsung’s current QLEDs) all producing a brighter, punchier and more exciting HDR image. Some visible, on-the-fly picture processing is a real shame, too. Those niggles, combined with a relatively high price, prevent the A9G from receiving the full five stars, despite its brilliance in other areas.