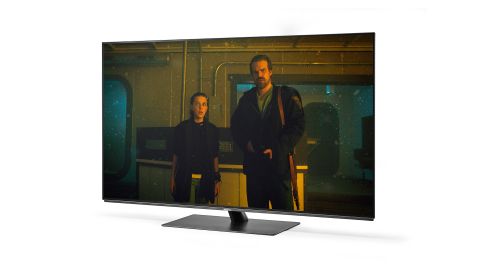 Great value and with impressive sound, the Panasonic GZ950 should definitely be on your OLED shortlist

These are tough times for TV manufacturers that aren’t LG. This is very much the age of OLED and, while almost every company sells OLED TVs, LG makes the panels for them all. So, how do you produce an OLED TV to rival the OLEDs from the company that makes the OLED tech?

Well, it's worth remembering the panel is only one part of the equation. Picture processing plays a huge part in the overall performance, while there are also aesthetic concerns and the issue of audio quality, not to mention the price.

These are all areas upon which a TV manufacturer can sprinkle a little of its own magic, and that's what the Panasonic GZ950 plans to do, here in its 55 inch form. It may not be flashy, but by offering a natural picture performance and great sound at a lower price than the equivalent LG OLED, the Panasonic TX-55GZ950B is a real contender.

From the front, the Panasonic TX-55GZ950B looks a bit bland and utilitarian. The OLED technology means the panel is supremely thin, with all the connections, speakers and processing bits and pieces housed in a plastic portion mounted to the back of the panel. That makes the GZ950 a fairly typical 6.2cm at its thickest point, but the housing covers more of the TV’s rear surface area than that of many rival models, making the profile a little less striking.

The simple, black finish means the thin bezels disappear in a dimly lit room and allow the picture to do the talking. The pedestal stand is slim enough to easily allow a soundbar to straddle it and has a footprint small enough to suit most furniture.

Around the back, you’ll find aerial and satellite sockets, an optical output, a dedicated headphone socket and four HDMIs. Those HDMIs aren’t fully HDMI 2.1-certified, but they do support Auto Low Latency Mode, which automatically switches the TV to its Game Mode when a signal from a games console is detected.

Unfortunately, the more appealing HDMI 2.1 Variable Refresh Rate and eARC features are not included. The lack of eARC (Enhanced Audio Return Channel) is a shame, as it means there’s no way to send Dolby Atmos sound from the TV to a connected sound system. And while there’s a satellite tuner on board, it isn’t Freesat-enabled, so it's of little practical use to users in the UK.

Panasonic has made waves this year by being the first manufacturer to support both of the two more advanced HDR formats currently available – HDR10+ and Dolby Vision – on top of standard HDR10 and the HLG format favoured by broadcasters.

Clearly, this format agnosticism is great for buyers spending top dollar on an OLED TV, even though HDR10+ isn’t particularly widespread yet and is patchily implemented at best. Amazon content that carries the format isn’t labelled as such, for example, and priority is given to Dolby Vision when a TV show carries both. Still, future-proofing is a positive here, and it may be enough to tempt some away from LG (which supports only Dolby Vision) and Samsung (which offers only HDR10+).

Panasonic’s operating system prioritises simplicity over flashiness. That will appeal to some, but as well as looking a bit basic next to the slick approaches of Samsung and LG, Panasonic’s My Home Screen 3.0 is also a little less well appointed in terms of apps. The basics are covered – Netflix and Amazon in 4K and HDR (with Dolby Vision and HDR10+ where available), BBC iPlayer, ITV Hub, All 4 and My5 – but useful extras such as iTunes, Google Play Movies & TV and Now TV are missing. Rakuten, meanwhile, is on board but not in HDR, contrary to the in-app labelling.

The rudimentary operating system is mirrored by the remote control. Essentially the same zapper that Panasonic has bundled with its TVs for years, it is cluttered and feels plasticky, lightweight and a bit awkward in the hand. A bigger problem is that it relies on line-of-sight for commands when many rivals at this end of the market do not.

The Panasonic GZ950’s default settings produce a duller picture than the best around, particularly with HDR content, but you don’t have to change much to improve things significantly.

Personal preference always plays a part with this sort of thing, but we start by switching off the Ambient Sensor, HDR Auto Brightness, all noise reduction and 16:9 Overscan. We then increase Sharpness by about 10 points and pump the HDR Auto Brightness up to its maximum level. We find the Cool1 Colour Temperature setting offers crisper, purer whites than the default Normal, and switching the Intelligent Frame Creation to minimum results in the best balance of motion smoothing and cinematic authenticity.

On its default Max, the motion handling setting tightens and smoothes everything, but also creates a lot of artefacts around tricky motion. Switching this to minimum allows in a little judder and blur but almost entirely removes motion noise. Motion processing always involves a compromise, but the Panasonic gets it much more right than most. In fact, only Sony currently does it better, such as on the XG9505.

Though the LG C9 is a bit punchier, this is still an exciting picture with a natural balance to contrast and colours. There’s real tonal subtlety that makes skin tones look realistically organic. Blacks are inky deep – this is an OLED after all – but there's plenty of dark detail and bright highlights stand out dramatically.

Naturalism is the order of the day here. There’s consistent, instinctive authenticity to everything the Panasonic does. You never question what it’s doing, and that means you can be entirely focused on what you’re watching. The only exception is a bit of banding to big blocks of colour.

But compared to the very best, including the LG C9 and Samsung Q90, the Panasonic lacks that last bit of polish and dynamism. The GZ950 is a bit softer and less revealing of detail. The image pops from the screen a little less and isn’t quite as solid as its rivals.

The same is true as we move down from 4K HDR to regular 1080p (we enable the Dynamic Range Remaster here), but we’re again pleased by the naturalism on offer. The upscaling is good enough that you’re barely aware it’s happening.

It is even more impressive when we drop to standard-definition content. You won’t be fooled into thinking you’re watching in 1080p or 4K but, given the quality of the signal and the amount of information that the TV is creating, the results are extremely impressive. If you still watch lots of SD, you should probably put this Panasonic at the top of your shopping list.

At this point, the GZ950 was on course for a solid four-star verdict, however the sound is so much better than we’d expect at this price point that we are forced to reconsider.

This is a big step up over the audio performance of the LG C9 and Samsung Q90. Crisp, weighty, dynamic and nuanced, for a built-in speaker system this is impressive. Where the LG C9 struggles to dynamically distinguish between a talkie scene that turns to action, the Panasonic delivers a healthy dose of drama and excitement. You’d have to spend a lot more (on the LG E9 or Sony AG9, for example) to get better TV sound, although a decent separate sound system is still the very best option.

On sound settings, we turn Bass Boost off as it muddies the delivery, and leave Dolby Atmos on – it doesn’t fill the room with virtual surround sound as you might hope, but it does add a little airiness and scale.

The Panasonic is a solid performer that pleases with its consistency and natural picture, but lacks that last bit of dynamism and excitement that turn a good TV into something really special. The operating system is a step down from the best in class too, in terms of both presentation and app selection.

But the Panasonic GZ950 counters with a lower price and much better sound than its nearest rivals. Offering a saving over the LG C9, there’s an argument that you’re less likely to notice the Panasonic’s picture deficiencies than the LG’s sonic shortcomings. That makes the Panasonic GZ950 a fine TV that will be particularly appealing to those who would rather not buy a separate sound system.