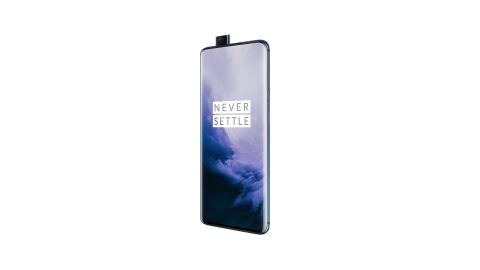 Offering flagship features for midrange money, the 7 Pro is a serious threat in the Android market

Mid-year updates are as much a ‘thing’ in the smartphone industry as they are in financial reports, so it’s no surprise that OnePlus has launched a new flagship handset, the OnePlus 7 Pro, a mere eight months after the arrival of the previous top-tier 6T, and five months after the 6T McLaren edition.

The OnePlus 7 Pro is the big-screen brother of the OnePlus 7, launched at the same time. The Chinese brand’s usual ‘T’ naming may have gone, but the 7 mimics its predecessors in coming with a ‘flagship-killer’ label. Priced at between £649 and £799, depending on the finish, storage and RAM options, it is certainly easier to swallow than the four-figure launch prices demanded by phones like the Apple iPhone XS Max and Samsung Galaxy S10+.

Considering the 6T arrived at £499, OnePlus’s loftier ambitions are clear. Grant the 7 Pro pride of place in your pocket and you’ll see those ambitions are fully realised.

The OnePlus 7’s 6.7in QHD+ Fluid AMOLED display – the largest screen in a OnePlus handset – will please those who want to watch an episode of their favourite TV show on the commute. The full-screen view makes it comfortable to watch at arm’s length, while its near-4K resolution of 3120 x 1440 is so clean it appears to shine. It is also capable of a brightness you’ll rarely need, nor want if you’re hoping to conserve your battery.

We select the ‘Natural’ screen mode during set-up, but ‘Vivid’ highlights the 7 Pro’s capacity for rich tones. In Riverdale, the screen’s punchy palette suits the show’s teen drama glossiness, with Archie’s ginger mane and blue and yellow football jacket potently displayed. Its colour enthusiasm and excellent contrast go hand-in-hand with its support of both HDR10 and HDR10+ content.

Stream Lost In Space in HDR on Netflix, and the lights on the spaceship jump out from the darkness. Likewise, with its moments of high-contrast, the sci-fi drama Bright is a great advert for both the HDR technology and the phone’s display. It’s not game-changing enough to influence your viewing habits, but it’s a worthwhile feature.

OnePlus has increased screen responsiveness by upping its frame rate to 90Hz (meaning the screen refreshes 90 times per second). This has worked a treat, with video streams crisp and smooth.

We’d trade some of the 7 Pro screen’s polish for grittier insight, though. The screen overlooks blemishes in skin tones, and a comparison with the Apple iPhone X confirms our suspicions that its low level detail and the rendition of subtle changes of light could be improved.

Stereo speakers aren’t exactly at the cutting edge of smartphone technology, but the 7 Pro is the first OnePlus handset on which they appear. The Chinese brand has gone all-out with Dolby Atmos certification here. Those familiar with Atmos should temper expectations though – you couldn’t describe it as an immersive 360-degree surround sound, but there are useful modes for music and movie content.

We experience a familiar feeling of disappointment at the OnePlus’s 7 Pro lack of 3.5mm headphone jack, but at least it’s no surprise – the 6T also went without. There are no headphones or adapter in the box, but OnePlus would no doubt point you to its new Bullets Wireless 2 Bluetooth earbuds (£99/$99). There’s aptX HD Bluetooth support for optimal wireless transmission with compatible headphones, too.

The OnePlus 7 Pro doesn’t have the sonic spaciousness, subtlety or rhythmic knack of the iPhone XS Max, XS or even the 8 Plus, but by smartphone standards it still makes for a reasonably entertaining and insightful listen. Its rendition of Blend (from Tidal) reveals enough texture and detail to communicate Aldous Harling’s breathy vocal.

Its neutral balance and weight helps the piano in Eluvium’s Radio Ballet to carry substantial heft. We play Suede’s Outsiders and the guitar riff rips through the bass with clarity and insight, although compared to the iPhone’s more coordinated and open presentation, it does feel a little mashed in with everything else.

The 6T was notable for its in-screen fingerprint unlocking tech, and OnePlus claims to have improved its speed and accuracy of the embedded scanner with a three-element plastic lens and larger sensor.

Initial set-up requires the usual repeated placement of several angles of your digit, and once in action the scanner works well: quick, reliable and not hugely fussy with positioning. OnePlus claims it’s the ‘world’s fastest’ scanner, and whether that’s true or not, recognition is prompt.

The operation is just as slick too, thanks to the inclusion of the top-of-the-line Snapdragon 855 processor – the same as in the Samsung’s S10 and the latest Sony and LG handsets. Even with multiple apps and windows open, the 7 Pro is up with the best in terms of operational speed and multi-tasking. The fact it runs only a lightly-customised skin (Oxygen OS) on top of Android Pie 9.0 should delight Android purists.

To cater for all that power, the 7 Pro houses a substantial 4000mAh battery (up from the 6T’s 3700mAh), which sits between the Samsung S10 (3400mAh) and S10+ (4100mAh). We comfortably get a day’s use from a full charge, although heavy users shouldn’t expect more than that. OnePlus’s Warp Charge 3.0 charger (supplied) is handy for rapid charging, with the official claims being zero to 50 per cent in just 20 minutes.

Like its Chinese rival Huawei, OnePlus has focused on the camera, which boasts the type of specs you’d see on a serious SLR. The rear triple-lens arrangement is headed up by a 48MP main snapper, accompanied by a 16MP wide-angle lens and 8MP telephoto lens.

The camera’s performance is only narrowly beaten by Huawei’s P30 Pro and it certainly appears to be punching above its price tag. Point-and-shoot photo capture yields impressive results with plenty of detail and exposure. It handles contrast as well as we’ve seen on a smartphone, and even without Nightscape mode (which improves clarity), photos in low-lit conditions are captured with apt clarity and detail. There’s a 3x optical zoom too.

To make use of every millimetre of OnePlus 7 Pro large, 6.67in screen, the front camera notch has been replaced by a pop-up 16MP camera module. Turning the selfie view on automatically elevates the module from the top of the screen, retracting again when switched back to rear camera view. It looks fragile, but OnePlus has ensured the component retracts when it detects being in free-fall.

Though it isn’t officially dustproof or waterproof (some evidence suggests the phone is, OnePlus simply didn't get the certification), the gorgeous handset has a nicely weighted premium feel. The bezel-free, curved-edge Gorilla Glass screen, unimpeded by a notch, is exactly what you want from a flagship. And the glass back casing bares a stunning reflective finish, especially on our Nebula Blue review sample.

The deep blue colourway isn’t available on the cheapest handset option, however. The most affordable handset is the 6GB RAM and 128GB storage option in Mirror Gray (£649), with the 8GB RAM and 256GB storage version attracting a £50 premium in either Mirror Gray, Nebula Blue or Almond finishes. The top-tier 12GB and 256GB variant in Nebula Blue, on test here, is £799.

If you were expecting OnePlus to have cut corners with the 7 Pro to achieve such a competitive price point, you’ll be pleasantly surprised. Apart from a few minor issues, such as the absence of the 3.5mm headphone jack and the lack of waterproofing, the 7 Pro is a force to be reckoned with.

The OnePlus 7 Pro undercuts the price of rival brands’ flagship smartphones, offering a better performance-per-pound ratio. This is the best smartphone the Chinese brand has produced, and the best value flagship on the market too.

See all our our OnePlus reviews