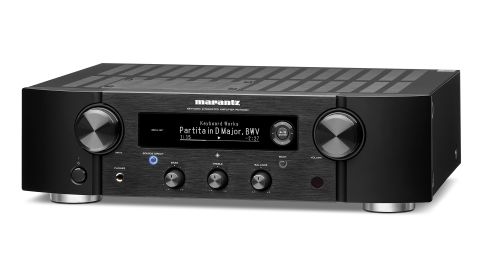 A practical, well furnished just-add-speakers streaming system that impresses with its entertaining performance

The world is now accustomed to the hi-fi equivalent of Mary Poppins’ magic bag; components that miraculously (and conveniently) pack everything into one, compact box. The Marantz PM7000N may not house a hatstand or a lamp within its chassis, but it does pack in 60W per channel of amplification, a DAC, network module and access to a host of music streaming services.

Pair some decent standmounters or floorstanders with this just-add-speakers system and, as the no-nonsense nanny might say, “there’s the whole world at your feet”.

Given the familiar full-width design Marantz has persisted with for decades, you might question how new the Marantz PM7000N actually is – especially since the brand has adopted a more contemporary look for similarly spec’d systems, such as the Melody X. But as Poppins herself noted, you should never judge things by their appearance.

Of course, a streaming system is no leap in the dark for Marantz – the Japanese brand has a rich history in stereo amps, network players have become a staple in its two-channel offering, and Marantz has squeezed both into one package before. So, it’s no surprise to see Marantz’s proprietary technology inside the PM7000N.

Its pre-amplifier and phono circuit use the HDAM (Hyper Dynamic Amplifier Module) technology that’s been a key staple of Marantz kit since the 1990s. The newly developed preamplifier section leverages the brand’s latest electronic volume control, while the power amp section is fully discrete and the network module and digital board shielded to prevent interference.

In an effort to simplify the signal path and reduce component count, Marantz has integrated a field-effect transistor (FET) into the input stage of the new integrated phono design. And, as with its PM6006, Marantz has chosen a toroidal transformer here, as opposed to an El core, due to its greater efficiency and low mechanical vibration. There are new, upgraded speaker terminals too.

The PM7000N uses an Asahi-kasei AK4490EQ DAC over the Ciruss Logic CS4398 chip found in the likes of its PM7005 and PM6006 amplifiers, allowing for 24-bit/192kHz PCM streaming across the digital inputs (USB, coaxial and two optical) and music servers, and 5.6MHz DSD streaming across the USB input and music servers. For better performance, an Analog Mode can be used to disable all digital sections when not in use.

While those digital connections, plus four analogue inputs (one of which is a newly designed phono), allow you to hook up external components such as a CD player, turntable or USB stick, there’s plenty of source material within the Marantz itself. The PM7000N leverages the hi-res, multi-room HEOS platform created by Marantz and sister brand Denon, giving owners direct access to networked music servers, internet radio, and several music streaming services including Spotify, Tidal, Deezer and Amazon (including the new Music HD tier) over wi-fi or ethernet.

There’s AirPlay 2 for one-touch streaming from Apple devices, and the offline convenience of Bluetooth. Those interested in voice control will be pleased to know Amazon Alexa, Google Assistant and Apple’s Siri are supported too.

Naturally, your preferred navigation tool will be your smartphone or tablet running the HEOS streaming app, from which you can access and control music, switch sources and connect players in a multi-room capacity. We’ve seen better streaming apps –BluOS and Naim, for example – but HEOS is robust and easy to use. If you misplace your phone or prefer a more hands-on approach, the plasticky front-panel navigation buttons can be used to perform simple control tasks.

There’s an argument for not having text displays on streamers – after all, your smartphone screen is essentially a display – but we like that we can put our phone down and read song information during the playback of an album, courtesy of the Marantz’s three-line OLED display.

Aesthetically, this is an old-school Marantz, with large volume and input dials, smaller bass, treble and balance tone knobs, and a 6.3mm headphone jack. Less obvious is the function that allows the Marantz’s supplied remote to control the volume, input and power of a connected TV.

The downside to Marantz’s design consistency is that the PM7000N doesn’t look particularly premium compared to some of the company’s more affordable products, but it’s smart and well built for the money. For anyone with other Marantz kit or who simply has more traditional taste in hi-fi, it will fit right in.

We select Rival Consoles’ Night Melody, hit play in Tidal within the HEOS app, and the PM7000N reveals a sonic character that’s powerful, expansive and weighty. It communicates the instrumental track’s dense soundscape well and ensures the pounding synths sound fittingly imposing within it.

It has the dynamic attention to convey the ebb and flow of the shuffling synths and their understated climaxes. We don’t feel obliged to turn up the volume to be engaged by the sound. When low-fi beats share the sonic frame with sparkling synths, the quality at both ends of the frequency spectrum is noticeable. But the midrange keeps pace too, even managing to eclipse last year’s Award-winning Bluesound Powernode 2i.

Play Hope Sandoval and the Warm Intentions’ Let Me Get There and the Marantz’s extra lucidity does wonders for the vocal play-off between Sandoval’s honey-soaked delivery and Kurt Vile’s amiable tone. While the Bluesound still makes a bold impression with an entertainingly dynamic and rich sound, the Marantz newcomer trumps its rival’s talents with greater clarity and expression.

Our past reviews of Marantz products have, on occasion, highlighted a tendency for the sonic character to lack excitement, however, there’s more than enough on show here as Bon Iver’s 666ʇ takes centre stage through our speakers. The PM7000N handles the track’s percussive dynamics well, conveying the album’s exuberant electronica vibe, and keeps a finger on everything in Vernon’s glitchy synth cacophony.

While the electronic pitter-patter that rides beneath the synth strings and Justin Vernon’s vocoder-clouded vocal can sound monotonic through less transparent kit, the insightful Marantz gets right underneath its intricate pattern.

On paper, the PM7000N seems a sure winner in its pairing of Marantz amplification and the HEOS streaming experience that has become part and parcel of networked Denon and Marantz kit. And thankfully that transpires in practise.

If you’re after a practical box of tricks for all your analogue, digital and streaming needs that is great to both use and listen to, this Poppins bag-like hi-fi system should probably be scribbled at the top of your wish list.

Read our Bluesound Powernode 2i review