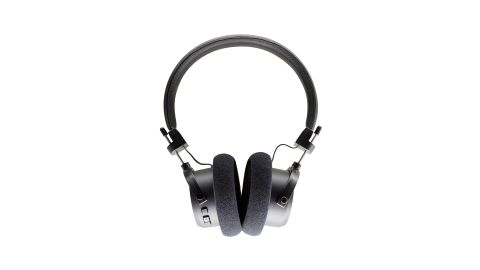 Grado's first pair of wireless headphones is truly excellent, but won't be for everyone

In some ways, the Grado GW100 headphones are as paradoxical as tech can get. They’re wireless, meaning their purpose is granting untethered portability so you can listen to music out and about free from wires. But their open-back design leaks sound both in and out, making them not only less than ideal in out-and-about environments, but also pretty unsociable in crowds.

But Grado was always going to go down this seemingly contradictory route - the Brooklyn-based company doesn’t have a single closed-back pair in its multi-Award-winning catalogue. This is the only shape its first pair of Bluetooth headphones was ever going to take. Are we looking at one of the best wireless headphones on the market? Read on to find out.

Yet, despite an introduction laden with scepticism, this review of the GW100s is accompanied by a five-star What Hi-Fi? badge. Because while the open-back, wireless GW100s won’t be for everyone or every situation, they will be perfect for those who want a pair for home environments, for pottering around the garden or listening to a Bluetooth turntable, when isolation from their surroundings isn’t important.

And within that niche capacity, they sound simply excellent – unlike any other wireless headphones we’ve heard – for their modest £169 price tag.

Before we gush about the Grado’s wireless performance, you should be aware of the potential drawbacks. The first is battery life, which is a claimed 15 hours based on 50 per cent volume and the type of music you’re playing.

Given that over 30-hour endurance from wireless headphones (even budget models) is normal these days, that’s not something to shout about, although it’s arguably less disastrous in the context of home use.

From an aesthetic point of view, the GW100s toe the Grado line as closely as every pair has done since the first nearly 30 years ago.

They’re most comparable to the Prestige Series with their compact form, all-black guise and circular on-cup details. Though not as universally stylish as a pair of Beats or Bose, they’re neat for their price and build and operation (power and volume buttons and instant Bluetooth pairing) are more than satisfactory.

They don’t collapse or fold in any way, being designed to be simply placed in the small plate-sized shell storage case they’re supplied with.

Despite their similarities with previous Grado models, the GW100s’ speaker housings and internals have been redesigned to serve their unique wireless nature. They may be open-backed, but Grado has worked to diminish sound leakage by up to 60 per cent. They are notably less leaky than the SR80e (£89) and SR325e (£269), but played at a reasonable volume they can still be heard a few metres away.

On the other side of the coin, what you’re subjected to isn’t always just your music – especially as the playful techno of Dusk’s Lea Valley fades into the quiet, ambient musings of Apparat’s Goodbye in our playlist. Wandering the streets, we find road traffic and planes flying overhead are audible at a normal listening level.

Still, it’s such openness that gifts the GW100s, as it does their wired siblings, a wonderfully broad sonic canvas on which to deliver your music. Compared with closed-back pairs, they really do offer a sense of comforting airiness, and we welcome the spaciousness that it affords within the soundstage. It’s like looking at the same painting on an A5 and A1 canvas – the same details may feature on both, but they’re easier to digest on the larger surface.

We head straight for Purple Mountains’ Darkness And Cold and the wheezing harmonica has the space to freely riff away from the accompanying jangly guitars – all without sacrificing rhythmic synergy.

The downcast lyrics contrasting with upbeat lamentation and melody come through with a clarity rarely heard through Bluetooth cans, and the level of insight on offer – in his hidden dejection, and in the subtler acoustic strums – is more generous than we’d expect from a pair at this price.

We up the tempo to Spoon’s The Underdog, and the GW100s ape their wired brothers once again, exhibiting a liveliness and agility that almost dares you to stay still during the exuberance of theatrical horns and addictive melody. Bass is fast and clean, midrange is dynamic – life is good.

They’re pretty much opposite in character to the five-star (and now-similarly-priced) B&W P5 Wireless, which favour a rich, punchy and bass-laden presentation that’s naturally more direct and compact.

While some may prefer their meatier nature and comparably thicker bass, there’s no denying the Grados possess the greater expression, clarity and ultimately more sophisticated balance. They lean slightly on the brighter side of the fence – but they’re easy to live with once their out-of-the-box harshness has died down after a couple of days’ running in.

Grado’s claim that “nothing is lost except the wires” here is mostly true, too. Through the supplied cable, which is sadly bereft of an in-line remote, the delivery is much the same, just blessed with a small extra dose of refinement and subtlety that serves as a reminder that wired is, ultimately, still the way to go if sound quality is paramount.

The Grado GW100s don’t boast the features you might expect from Bluetooth headphones today, and their open-back nature means they won’t be universally likeable either.

But they do carve themselves an undeniable niche appeal, backed by an excellent performance that’s Grado through and through. And if you’re drawn to that combination, you won’t be disappointed.