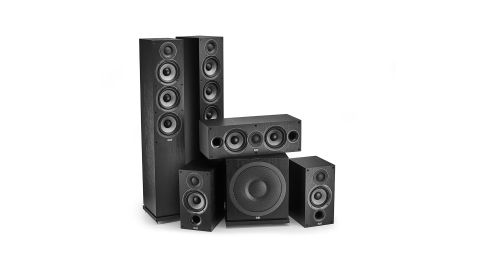 A deliciously mature and sensible speaker set for the money

Outstanding performers don’t always combine to best effect. Take the star-studded England midfield of the mid-2000s, for example; world-class individuals whose achievements amounted to far less than the sum of their parts.

In hi-fi terms, it’s especially true of home cinema packages, where the individual speaker elements may be impressive in their own right, but might not gel together.

The Elac Debut 2.0 5.1 Home Theatre System has at least six such elements – the Elac Debut 2.0 F5.2 floorstanding front speakers and the Elac Debut 2.0 B5.2 standmounter surrounds are both five-star rated, but with a centre and a sub thrown in, does the whole package come together to produce a class-leading performance?

The Elac Debut 2.0 speakers have been redesigned from the original Debut range of 2016. The internals of the MDF cabinets and the drivers themselves have changed. What hasn’t is their understated class from top to bottom.

The build is more solid than before thanks to the internal MDF bracing, which adds stiffness, strength and reduces unwanted vibrations. They’re finished in a mock black ash vinyl that blends into pretty much any home environment.

The drivers are a step on too. The new silk dome tweeters have a wide-roll surround that lifts the frequency response up to 35kHz for more realistic reproduction at the top of the range.

The woofer cones are made from a woven aramid-fibre; flexible and stronger than paper or polypropylene, according to Elac. It’s the company’s choice of compromise between the clarity of stiffness and the damping needed to stop unwanted resonance.

These treats come housed in the Elac Debut 2.0 F5.2 floorstanding fronts, two Elac B5.2 standmounters and the C5.2 centre speaker. The floorstanders are fitted with four drivers apiece – a 25mm silk dome tweeter and three 13cm woofers, plus there are three rear firing reflex ports down its length for a deeper push.

The bookshelf surrounds come with a tweeter and single woofer with the reflex port at the front to make the positioning distances from walls less crucial. The Elac C5.2 centre speaker also has front-facing ports; two within its cabinet, one at either end alongside the single tweeter and dual woofer combo.

There are also Elac Debut 2.0 A4.2 Dolby Atmos modules, which don’t come with the package, but are available at an extra £180 per pair. These fit on both the front and surround speakers and turn your 5.1 set-up into a 5.2.1 system with overhead sound for any height effects in Dolby Atmos-compatible films.

Lastly, of course, that .1 would mean nothing without the Elac SUB3010 subwoofer. It’s a 36cm tall box, weighing 14.5kg, with a 25cm long-throw driver. There are no volume controls around the back, instead use the Elac SubEQ smartphone app, from where you can control the volume by Bluetooth or have it use your mobile’s microphone to determine the best EQ settings for the sub.

That said, most people will probably use the mic and controls on their home cinema amplifier instead.

We sit down with Martin Scorcese’s boxing opera Raging Bull. From the off, this package feels like a knockout. Intermezzo from Mascagni’s Cavalleria Rusticana pours through the front speakers. The orchestral strings soar through the room, making the hairs on the backs of our neck stand up.

Remastered or not, this is not an easy score to do well, but this package gets it right. The audio is a touch bright and grainy, but we sit agog as Jake LaMotta ducks and weaves on the canvas. What we hear is undeniably beautiful.

As the action switches to LaMotta’s 1941 fight with Jimmy Reeves, the full suite of speakers kicks in. Punches thump on contact or swing and miss with threatening weight. The soundstage of the front three is subtle, polished and flawlessly joined up. The calls from the baying crowd come from all around as the boxers turn. There’s no doubt we’re standing in the ring amongst it all, right on the shoulder of our protagonist.

What’s astonishing is the realism of the soundscape. These aren’t effects picked and placed in one of six carefully positioned speakers, but a delightfully balanced audio image that bathes the viewer in the cinematic experience and lets the equipment melt away.

We switch to LaMotta’s date with Vikki, driving through the suburbs in an open top car. The sound from the centre is detailed, clear and natural, and voices are rich and clean. We hear the wind as they drive and the birds singing in the trees as they pass them. Later in the restaurant scene, the music from the jazz band is alive and modern and matched evenly with the dialogue.

It’s enough with the finery of classic cinema, so we move onto the more modern cinematic action of Baby Driver. From the off we’re in the getaway car with Bellbottoms by The Jon Spencer Blues Explosion blasting through Baby’s Apple earbuds. It’s a complicated mix of sounds with tyres screeching left and right; sirens blaring front and back, and all set on top of the music track, but the Elacs organise it all with great aplomb.

Everything is tied nicely together, even though the filmmakers have clearly dropped the effects more purposefully onto each channel in the mix. All the same, the sound is still smooth as the car screeches across the freeway with the audio drifting faithfully from speaker to speaker with the movement of the car.

It’s not a forward or aggressive sound that some speakers might push at this price to make the owner feel like they’ve really bought something. It’s subtle and balanced with no part of the frequency range dominant but still snappy and crisp. The quality of the audio remains consistent from speaker to speaker and scene to scene. It’s easy and transparent but capable of warmth when demanded.

We watch the live recording of Talking Heads in the 1984 concert film Stop Making Sense and there’s a genuine sense of space created between front man David Byrne and his backing singers, and there’s richness of every instrument.

Even when we try out the Dolby Atmos speakers on just the front floorstanders with The Predator, there’s an excellent sense of height. The tension is fantastic as the growls and echoed taunts of the titular alien dance over our heads in the trees. The roof of the audio dome is still very much at the front end of our space, and it’s obvious that a set of four of these would be well worth the extra outlay.

Our 2018 Award-winning Q Acoustics 3050i 5.1 package might have more muscle about it, but if you want subtlety and immersion from your home cinema experience, the Elac Debut 2.0 system is worth paying the extra £350. For more warmth and lots of kick, then the Q Acoustics is the better choice.

We’d happily spend more time watching our favourite soundtracks and scenes just for the treat of seeing what this speaker package can do. Their subtle, sensible and silky sound production creates the kind of wonderfully open and detailed soundstage that true cinema sound is about. They put you in the heart of the action so succinctly that you almost forget about the speakers altogether.

This Elac package is a real match-winner, whether for your two-channel or the full surround. You’ll be hard pushed to find better at this price.

How to set up your home cinema speaker system