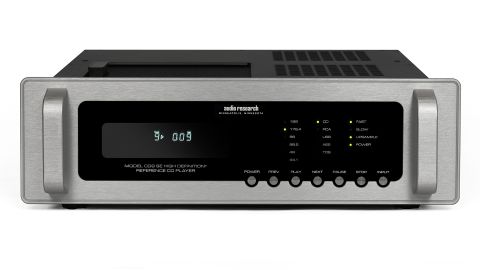 Is there still a place for a truly high-end CD player this far into the age of streaming? Audio Research certainly seems to thinks so. With its top-loading design, valve-powered output stage and hefty £15k price tag, the Reference CD9 SE is quite some statement.

The original Reference CD9 was introduced back in 2013, and quickly built a solid reputation as one of the best players around. Surprisingly, given the chunk of time that has passed, the move to SE spec is a relatively mild one.

The main changes centre on a redesigned front panel, which now mirrors those on Audio Research’s newest products, and an upgrade to the USB circuitry. Nothing else seems to have been touched, though that isn’t necessarily a bad thing. The original was always considered a cutting edge machine, and the market is a mature one that doesn’t move on in leaps and bounds every year.

Take the Audio Research out of its packaging and you’ll find that it’s a substantial unit. At 13.5cm tall, it’s pretty big and weighs in at a hefty 15kg. You’ll need enough space to be able to load a disc, which in most equipment racks will normally mean placement on the top shelf. You’ll also have to leave plenty of space around the player for ventilation. This thing runs hot.

Before initial use, the first course of action is to fit the full complement of valves. Whatever you do, don’t plug the unit into the mains until after this step is complete – there are highly dangerous electric currents flowing through the circuitry.

Remove the top panel – it’s held on by cross-headed screws – and push the valves carefully into place. Both the valves and locations are clearly marked so it’s hard to get it wrong.

The unit should never be transported with the valves fitted. They could move, possibly causing damage in the process. For the tube nerds out there, you’ll find four of the five 6H30s in the output stage with the fifth one working in tandem with a 6550WE in the power supply. Valve life is quoted at a pretty standard 4000 hours for the 6H30s and around 2000 hours for the 6550WE.

Audio Research also makes a model called the CD6 SE. It’s available for a third less money than the CD9 and the difference is that the more affordable machine’s circuitry uses transistors rather than valves. Having heard the similar last generation model, we suspect that it won’t sound as good.

Once we start using the CD9 SE, we’re reminded how nice a top-loading CD player is to operate. It feels a more interactive and charming experience than using something with a conventional CD drawer or slot loader.

Sliding back the aluminium CD door reveals a Philips Pro2R CD transport mechanism, which Audio Research still considers the best dedicated option available. Don’t forget to put the magnetic puck in place after putting the disc on the motor spindle, otherwise all you’ll hear is the screech of polycarbonate on metal as it slips.

This player also has a choice of digital inputs – USB, co-ax, optical and AES/EBU are all on the menu. We’re used to premium DACs handling pretty much every music file format and resolution. Compatibility with 32-bit/384kHz PCM files and multiple-speed DSD is pretty standard at anything above budget level. So, it comes as some surprise that the CD9 doesn’t play that game. Its inputs are limited to 24-bit/192kHz at best, while DSD isn’t even on the menu.

How much this matters is open to debate. Few people will have PCM files beyond the CD9’s capabilities, but we can imagine some purists missing DSD playback. Given the price point, Audio Research has few excuses for excluding it.

We’re not sure there will be many people who buy a player like this and then connect it to an outboard DAC. But, for those that want to, there are digital outs in both BNC (coax) and AES/EBU form.

Moving to analogue, the CD9 SE has the standard pairing of balanced XLR and single-ended RCA. If you have the option, it’s worth trying both to see which one sounds better in your set-up. As long as the rest of your system is up to scratch we suspect the balanced option will win out in most cases. It certainly sounds a touch bolder and clearer in our experience.

There’s no denying that the CD9 SE feels solid and will last. The casework is suitably sturdy and we’ve no complaints about the quality of components used in the circuit. Audio Research products have almost prided themselves on having the look and feel of laboratory equipment and this CD player is no different. If you like to think of your hi-fi as a functional tool, rather than a piece of luxury electronics, you’ll find much to like here.

But, considering the superb standards of finish routinely available at this level, we want better. Would the CD9 SE be less of an Audio Research product if it were finished with the same attention to detail as products from the likes of dCS, Ayre or Burmester? We think not.

We have no such complaints when it comes to sound quality. This is a hugely accomplished performer that sets sky-high standards for one-box spinners.

Of course, you need to have a top class system to truly appreciate its talents. We use Gamut’s D3i/D200i pre/power driving a pair of Audiovector’s R1 Arreté speakers, as well as a Nagra PL-P feeding Audio-Technica’s Kokutan and Grado’s GS1000es headphones. An Apple MacBook Pro loaded with Audirvana music-playing software and Cyrus’s Signature CD transport are on hand to test the digital inputs.

We start by trying the CD9’s various filter and up-sampling options. The filter choice is between ‘Fast’ and ‘Slow’ with upsampling either on or off. The decision comes down to system, recording and taste, with our preference swinging between ‘Fast’ with upsampling and ‘Slow’ without. It’s important to recognise that this is never a make-or-break thing, and there isn’t necessarily a right or wrong answer.

We play Arvo Part’s Tabula Rasa set and are stunned by the CD9’s ability to render space and scale. It renders a believable acoustic, delivering enough spatial information to make it easy to guess at the size of the recording venue and the musicians’ placement within it.

Stereo imaging is excellent. Instruments are precisely placed and remain focused no matter how complex the piece gets. It’s this stability and control that makes listening to this player so easy. It simply lets the listener concentrate on the music rather than introducing anomalies that ultimately prove fatiguing over the long run.

There’s just so much detail here from the rich, harmonic texture of the instruments to the dynamic nuances that build into the irresistible ebb and flow of the piece. There are players that sound shrill with the strings on this recording, but through the CD9 SE we get all the natural bite without added harshness. This is a wonderfully fluid, refined and natural-sounding performer.

It helps that the tonal balance is nicely judged. The CD9 is just a little sweeter and fuller sounding than the norm. The player’s innate refinement means that it works well across a wide range of recordings. While its high level of transparency means that flaws in recordings will always be obvious, they rarely intrude on our enjoyment.

We switch to Bruce Springsteen’s High Hopes set and the Audio Research continues to impress. There’s plenty of drive and power in tracks such as the reworked The Ghost Of Tom Joad. We’re pleased with the attack of the electric guitars and the way the player drives the song with such enthusiasm. Those expecting a valve-based CD player to sound soft and lush are in for a real shock.

Springsteen’s voice comes through with grit and passion intact. There’s natural warmth here and the kind of dynamic nuance that only the best hi-fi manages to convey.

We try the digital inputs and the results are equally positive. That reworked USB sounds excellent. It gives a full dose of the insight and expression we hear from CD, even if ultimately our laptop isn’t as good a source (even with hi-res files) as the internal disc drive. We’re pleased to report that we don’t notice any great discrepancy between the inputs.

Despite our criticisms of some aspects of finish, there’s no denying that the CD9 SE is an excellent player. If you’re after a one-box solution, we haven’t come across an alternative that works as convincingly.

So, to return to our original question, is there still a place for a truly high-end CD player? If it’s as capable as the CD9 SE then the answer has to be ‘yes’.