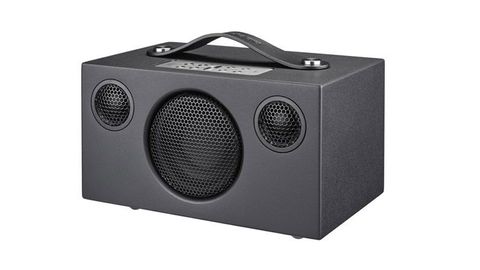 According to Leonardo da Vinci, “simplicity is the ultimate sophistication”. That mantra also appears to have been adopted by Audio Pro. Its range of wireless speakers has earned the Swedish manufacturer multiple What Hi-Fi? Awards in recent years, and, having now embraced multi-room, it was the obvious choice as our Product of the Year in 2018.

Included in our initial test were the Award-winning and still class-leading Addon C5 speaker, its larger (and even more sonically talented) sibling the Addon C10 – a wireless speaker Award-winner in its own right in 2018 – and the Link 1 (whose job it is to connect existing hi-fi components or wireless speakers into the chain).

In this extended review, we’ll be taking into account every one of Audio Pro’s multi-room products we’ve tested – an approach that only underlines the company’s sonic supremacy.

Audio Pro’s boom-box-style range of Addon speakers are instantly recognisable, as is their unrivalled sonic prowess. The multi-room versions, those with wi-fi, are the ‘C’ rather than Bluetooth-only ‘T’ model number, and they now number four products.

The Addon C3, Addon C5 and Addon C10 are pretty much visually identical but for their size, while the Addon C5A wears a volume indicator and pair of microphones on its head for its use with Alexa voice assistant.

Each comprises the 'koala bear' driver configuration that has become these speakers’ distinguishing feature, with a pair of 2cm soft dome tweeters and mid/bass drivers (and reflex ports, incidentally) growing in line with the cabinet.

The Addon C3 has a 9cm woofer, it measures 10cm on the Addon C5 and Addon C5A, while the Addon C10 has the largest at 13cm. The power output from the Class D digital amplification rises in similar increments: 15W, 40W and 80W respectively.

All four speakers house a large circular volume control flanked by sets of four smaller buttons on the top: for power-on, play/pause, input selection and Bluetooth pairing to the left, and pre-sets to its right.

Here is also where you’ll find the aux-in jack, which will save you having to tip the speaker forward and fumble around at its rear to find a connection.

Inputs on each Audio Pro’s behind are reserved for more permanent fixtures, such as the power cord, ethernet cable and stereo RCA. These are alongside outputs for sub-woofer and USB device charging, as well as a toggle switch for optimised playback depending whether you’re using wi-fi or anything else.

The key to their performance is musicality unrivalled by anything at a similar price – or even quite a lot more. Their level of detail is insightful, exposing the texture and timbre of each instrument and vocal line alike without underplaying cohesion or organisation in favour of nit-picking analysis.

They time with metronomic precision, but temper it with the kind of dynamic sense that captures rhythmic emphasis nicely. And that dynamic expression is a strong positive over the speakers’ entire performance, able to reflect lavish shifts and subtle nuance alike. It simply does everything right, and without fuss.

The increased power and driver and cabinet size predictably ushers a grander performance each step you take up the chain, with the Addon C10 particularly able to rattle trinkets from the mantelpiece or twist our insides with its low-end authority.

But with every size and price increase, Audio Pro steps up its game. There is more space to the presentation, more three-dimensionality and ambient detail, greater headroom for more violent dynamic variation and an added maturity over the more delicate. Every penny of the loftier price tag is paid back with interest.

Whereas the Addon range once dominated Audio Pro’s wireless speaker output, now there are class-leading products in different shapes and sizes at either end of the spectrum.

A fabric-coated cylinder standing just shy of 20cm, the A10 resembles more the kind of speaker we’re used to seeing from the Scandinavians’ rivals, but most importantly it brings the company’s sonic signature sound to a multi-room speaker costing less than £200.

The usual connections, wired and wireless, are featured, with the A10 having capacity for 3.5mm aux, Bluetooth 4.0, Apple AirPlay, wi-fi and Spotify Connect. It also supports MP3, WMA, AAC, FLAC and Apple Lossless formats.

Inside, however, much has changed from the A10’s rectangular stablemates. Not wanting to sacrifice the full body that has become a beloved aspect of its class-leading sonic character, Audio Pro has packed in a 7.5cm long-throw woofer and bolstered its output with two 11.5cm passive radiators.

It is the use of a BMR, or Balanced Mode Radiator, tweeter that is most canny, however. Among its many benefits, this flatter-faced driver has the ability to offer wider dispersion than a traditional tweeter – up to 180º in fact – and so can make the most of the A10’s cylindrical form, making it far less fussy when it comes to positioning.

Unsurprisingly, that’s one of the first things that jumps out when we switch the A10 on. We love the directness of its siblings, but the versatility and sheer spread of sound here is to be admired. It doesn’t have quite the unwavering focus, nor the sheer weight in the low end, but we can move around our test room and still be treated to the same high quality sound.

There is that familial knack for timing and dynamic judgement, albeit with the price difference taken into account, equating to a musicality to which it is simply a joy to listen.

The Drumfire is a 65cm-tall floorstanding colossus reminiscent of a guitar stack that proves Audio Pro’s ability to retain its Award-winning sonic signature even when the speaker tips the scales.

The big bottom portion of the Drumfire houses a 20cm subwoofer powered by a 200W Class D amplifier to pump bass into the room. On the back are a couple of dials for crossover frequency and volume level, and two switches: one that toggles the speaker's standby mode, and the other to manage phase.

On top of the sub is the second part of the Drumfire’s set-up, containing two 11cm woofers and a 25mm tweeter. This box has an RCA input for an external analogue source, as well as an ethernet port and 3.5mm input.

In fact, its features are otherwise generally in line with the rest of Audio Pro’s speaker offerings, right down the playback and pre-set panel on its roof.

As the Addon C10 is to the Addon C3, similarly the Drumfire’s better-honed talents run further than the added power and bottom end over its family members – it is again a step up in terms of performance across the board.

Another Award for Audio Pro is barely news anymore, but the fact this year the Drumfire displaced the Naim Mu-so – a product almost double the price we once heralded as the nearest to hi-fi we’d heard from a wireless speaker – as our most expensive champion in 2018 is proof it is operating on a different level to anything else around it.

Though there is a pair of unknown quantities in the Audio Pro line-up as far as we’re concerned – the Addon C-Sub can help those smaller speakers delve deeper into the low frequencies, while the A40 is set to receive a wider release following its design for the company’s 40th anniversary – our time spent with the rest of the company’s speakers allows us to confidently celebrate it as the best-sounding multi-room suite available for the money.

Sized and shaped like an ashtray, the Link 1’s duties are to collect song selections from the app, connecting to your home network via either wi-fi or its ethernet input, and dispense via whichever output you have selected.

These are limited to optical and analogue auxiliary - though with a 3.5mm-to-RCA cable included, connecting to pretty much any existing set up could hardly be easier.

That’s really about the size of it: for the £100 price of Link 1, any extra audio equipment – whether it's another Addon speaker or full hi-fi system – is now part of your multi-room network.

It perhaps shoulders a lesser burden in what is effectively a midwife role, but it performs its own specific task with equal aplomb to the speakers. It fits our Addon T3 like a glove, which is of little surprise – but even hooking it up to feed Spotify into our reference hi-fi system doesn’t hold the performance back, despite the inherent limitations.

It’s difficult to imagine a less stressful set-up procedure. The Audio Pro app seeks out all available products connected to the home network (with the option of adding those not already tethered manually), and they are then all there to manipulate as you wish.

Living with the app is a slightly different proposition, though. In some ways it’s simple – ‘drag and drop’ to partner or separate speakers, either in stereo pairs or multi-room zones, and tweak the bass and treble at your leisure. But it can be a little buggy, and is certainly limited compared to most rival systems.

The bugs are neither constant nor devastating, but the odd stutter and hang – particularly when pairing or splitting speakers – gets annoying in a short time.

Limitations, meanwhile, are felt in the requirement to leave the Audio Pro app in order to play music from Spotify or Apple Music, which leads to a rather disjointed user experience. It also means you can’t create on-the-fly playlists that incorporate tracks from those services and the others on board (Tidal, Qobuz, Napster and Deezer), or your own digitally stored collection.

But it’s important to point out the Audio Pro is far from the most limited multi-room app out there, and its occasional bug and rudimentary nature is forgivable when you consider the price and sound quality of the speakers it's controlling.

The Audio Pro range doesn’t include the designated home cinema components as some of its multi-room rivals, and the app is a little lacking – and that might limit the overall appeal for some people. But for sound quality at the price, this system is currently unbeatable.

As much as anything else, your chosen path for migration to multi-room should be about whose speakers you want around your house. For us, Audio Pro makes that particular decision admirably simple.

Read all our Audio Pro reviews