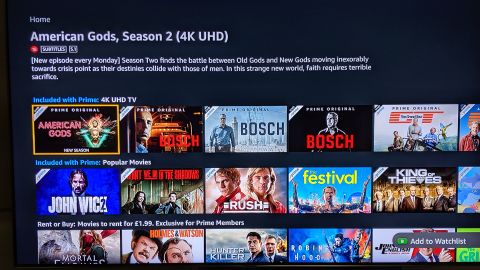 Having a day named after you might not mean what it once did – as the annual celebration of Squirrel Appreciation Day every January shows. But nonetheless the world-renowned prominence of Amazon Prime Day is indicative of how established the brand has become.

That success isn’t solely down to the usefulness of its vast online store and unique delivery options though. Its video streaming service, Amazon Prime Video, is ‘one of the most complete and competitive streaming services’, as we noted in a previous review.

But in the face of competition from Netflix (and soon Disney too), Amazon can’t afford to let up. Greater device support, thriving Amazon Studios productions and more titles in an increasing number of cutting-edge video formats keep it relevant, as does its current edge over its rivals where 4K content is concerned.

They say the best things in life are free – and in the world of video streaming, Ultra HD films and TV shows on Prime Video are the equivalent. While Amazon’s video streaming service isn’t free, it doesn’t ask a premium for its 4K content, unlike Netflix.

Since our last visit, Amazon has kept the same tiers and price, so for £6 ($9) per month, you get unlimited access to Prime Video’s catalogue, while £8 ($13) is the monthly fee for full-blown Amazon Prime membership.

This adds ad-free streaming of Prime Music, access to a selection of eBooks, magazines and comics, unlimited photo storage in Amazon Cloud Drive, and one-day and same-day Prime delivery on select Amazon-stocked products. Either tier lets you watch Prime Video on three devices simultaneously and download available titles to two devices at one time.

Amazon doesn’t publish its catalogue numbers, but a few minutes browsing reveals the true expanse of its encyclopaedia. The digital equivalent of Blockbuster’s former flagship store, it has tens of thousands of titles, with TV shows and films included within Prime sitting alongside an a la carte menu of both new and old pay-for TV and film rentals. Priced up to £4.50 to rent or £10 to buy, there’s everything from John Wick 2 to John Wayne classics, Mr Robot to Mr Bean.

Amazon’s own programming, including Prime Originals and Exclusives, appear on the homepage with all the subtlety of a Times Square billboard. The pride is justifiable, though. In just six years, Amazon has racked up 50-odd drama, comedy and docu-series shows, more than a handful of which are into multiple seasons (Bosch, for example, has five). Netflix’s claims are pretty impressive too, of course, and the importance of the traction of original content cannot be understated.

The Prime Video ‘channels’ offer quick, embedded access to curated material on other streaming platforms – such as BFI Player, Shudder, MUBI, Discovery and Eurosport Player in the UK, and HBO, Showtime and Cinemax in the US  – although you’ll need a subscription to access each service.

Prime-only subscribers should be satisfied with the amount of material at their disposal, not least if they’re looking to make the most of their new 4K screen. There are roughly 100 seasons of TV shows and a more modest collection of films in Ultra HD, many of which are also available in HDR (High Dynamic Range).

What’s more, every HDR title on Amazon (Samsung claims there are over 1000) is now also available on HDR10+, a format that adds dynamic metadata to the HDR signal to create more detailed colour reproduction. The catch is that HDR10+ on Amazon is currently only supported by a few Samsung 4K TVs from 2017 and later.

But rallying behind the fledgling HDR10+ hasn’t prevented Amazon from supporting the rival HDR format Dolby Vision. Currently the list of titles is much smaller, with Tom Clancy’s Jack Ryan and a handful of Sony Pictures films such as After Earth, Fury, Elysium, Men In Black 3 and The Amazing Spider-Man 2 available on compatible devices.

Dolby Atmos surround sound content arrived on the service last summer, kicking off with the Jack Ryan series, but hardware compatibility is limited to Amazon’s Fire TV and Fire TV Stick, Microsoft’s Xbox One, Xbox One S and Xbox X consoles, the Apple TV and LG and 2017 or newer Samsung 4K TVs. It’s early days for these technologies, but their continued growth and integration seem inevitable.

Access to Amazon Prime Video’s catalogue is pretty much ubiquitous – something we haven’t always been able to say. When we last revisited Prime Video, its app was absent from Apple’s TV and Google’s Chromecast video streamers, due to disputes between the rival firms. Thankfully, those glaring omissions are no more, and it is now present on Apple TV, and Google Chromecasts should get the app shortly.

Prime not only sits centre stage on Amazon’s own Fire TV streamers but is also embedded into the device OS interface. As you’d expect, Prime Video is also available through its web browser, iOS and Android apps and TV app (most premium 4K TVs support 4K playback on the app too), as well as on set-top boxes and games consoles.

Depending on whether you’re after an hour’s entertainment during dinner, or are in for the long haul, you can strip out films or TVs from the interface so that your browse is more of a marathon than an Iron Man. Kids and sports can be easily singled out, and your video library (purchased TV shows and movies) and watchlist (saved to watch later) are also easily accessed in the header at the top of the screen.

Prime titles dominate the interface compared to buy/rent titles, although we’d prefer the ability to strip out any buy/rent titles from every interface. The brief joy when you first glimpse Mary Poppins Returns, closely followed by disappointment upon realising it doesn’t have a Prime badge, is an unwelcome emotional rollercoaster.

The search function sometimes throws up oddities, but 4K material is now easier to find, and now has its own category header near the top of the home page – as do the individual TV and film pages. Just as every title included in a Prime subscription bears an easily identifiable tag, each 4K title bears a ‘UHD’ one.

Entering the programme or film description, you’ll see logos for HDR, 5.1, Dolby Atmos and subtitles, too. Amazon has recently improved its tagging to flag the different technologies, although there’s room for improvement. A flag for, say, HDR10+ titles would be preferable to having to take Amazon’s word for it.

The quality of 4K HDR content justifies its presence. While not as crisp or punchy as Ultra HD Blu-ray pictures, the streams have the insight and refreshing glossiness to easily tell them apart from Full HD streams. On our 65in Samsung TV, it looks lovely.

Crucially, 15Mbps of internet is required to stream 4K and HDR – not bad considering the average internet speed is around 19Mbps in the UK and 25Mbps in the US. It’s worth noting that Amazon uses adaptive bitrate technology to constantly alter picture and audio quality for optimal performance depending on network speed. Full HD material is in-line with expectations set by the online streaming world, too.

By the end of the year, the video streaming battlefield will reach peak density, with Disney’s and Apple’s new services due soon. But Amazon should feel relatively safe with its multifaceted Prime offering and great-value ‘next-gen’ content.

If you’re after an all-encompassing mass-market service, rather than a smaller, curated alternative such as MUBI, the choice between Amazon and Netflix may well come down to whose Originals you like more, or indeed a loyalty to Amazon’s ecosystem of ultimate convenience.