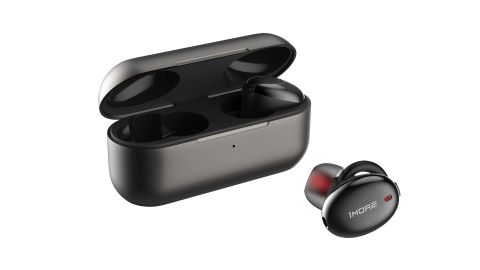 The 1MOREs deliver a premium first impression, but poor noise-cancelling and an average sound means they aren’t contenders at this price

The True Wireless ANC In-Ear Headphones undercut the Apple AirPods Pros by about £60 ($50) on price, and boast a feature list that matches Apple’s omnipresent noise-cancelling buds.

There is aptX Bluetooth 5.0, two levels of active noise-cancellation as well as a pass-through function (to filter ambient noise into the headphones), plus a hybrid dual-driver design, all presented in a premium package.

1MORE is on a mission to prove it’s not just ‘one more’ dedicated headphone outfit. It’s just a shame that the True Wireless ANC In-Ear Headphones don’t live up to their promise.

The 1MORE True Wireless ANC In-Ears products are presented and kitted out with all the accessories you’d want and more.

There’s a beautifully illustrated inside cover with conceptual sketches of the earpieces and their case, and inside the box there are a total of seven different silicone ear-tips and four separate pairs of O-hooks for a secure fit.

We downsize from the pre-fitted tips and find the fit as close to perfection as any true wireless earpiece we’ve tested. They’re so comfortable in fact, we barely feel them in our ears.

The supplied USB-C charger (the headphones are also compatible with Qi wireless chargers) should provide two hours of juice from a quick 15-minute charge. As well as a premium-looking metallic case, there is also a drawstring pouch for all those extra tips and hooks.

Battery life is a claimed five hours with ANC on, or six hours without it – that’s about an hour more than from the AirPods Pros, but an hour or two less than the Sony WF-1000XM3s. There is also an extra 10 to 13 hours from the 1MORE case, depending on whether you use ANC. 1MORE claims a total of around 22 hours from the entire set-up, without ANC, before the charger needs juice itself.

The case is slightly larger and heavier than that of the AirPods Pros but still slips easily into your pocket. The case feels protective, too – the lid snaps shut with strong magnets and feels well-engineered. There’s a small LED on the front of the case for battery status: when the lid is opened (or charging) it glows red to indicate low, orange for medium or green to signify a full battery.

1MORE has again chosen to go with its own, proprietary ANC solution for its true wireless flagship product, as well as a dual driver design. The company’s patented balanced armature driver handles high frequencies, and a more traditional dynamic driver takes the lows.

Qualcomm’s aptX Bluetooth 5.0 chip is onboard. aptX HD isn’t supported, however, the driver integration, design and engineering all play a far greater role in terms of sound quality and performance. During our tests, the connection never wavers and the 1MOREs pair without fuss, each and every time they’re removed from their case.

Each earpiece has two ‘buttons’: a sensor makes up the entire elliptical top surface of the bud (and handles toggling between noise cancellation profiles) and there’s a little physical button on the far edge of each unit.

It’s easy for an index finger to find these without knocking the buds out of position. Two presses pauses or resumes playback, a single click alters volume (right to increase, left to decrease) and three clicks on either bud fires up Siri.

These don’t take long to get used to, both when listening to music and during calls. We find ourselves using these controls rather than reaching for our phone, which certainly isn’t always the case with all wireless earbuds.

It is worthwhile downloading the 1MORE Music app. Here, you can make sure your headphones are running the latest firmware, toggle ANC levels via the app, access a mini-guide to the headphones’ button functions and see the battery percentage for each bud.

1MORE points out that the app is in its infancy, but it’s already well-designed and, though devoid of any EQ settings, you can easily use it to toggle the auto-off function and select your preferred level of noise-cancelling.

Unfortunately, the noise-cancelling is poor. Whether we select ANC Level 1 (suitable for aviation or high-speed trains) or Level 2 (suggested for noisy streets) it doesn’t feel that any noise has been effectively eliminated.

The 1MOREs fail all of the noise-cancelling tests we throw at them, from air conditioning fans and general background sounds, to traffic noise and Radio 4. What’s more, both modes create a pressurised feeling in the ears and add some audible electronic fuzz that more sophisticated rivals, such as the AirPods, do not.

On top of that, the noise-cancelling modes have an awful effect on sound quality, initially applying an overbearing bass boost when a mode is selected before settling down to an overall balance that’s actually rather thin and bass-light.

All of which means the noise-cancelling is pretty much worse than useless and is best left off. The 1MOREs do at least provide a decent degree of isolation thanks to their excellent fit, but it’s hard not to be annoyed by paying for a key feature that isn’t up to scratch.

With all noise cancellation and pass-through off, we cue up the 2016 remaster of The Traveling Wilburys’ Volume 1 on Tidal. It’s spacious, dynamic, open and detailed, with delicate nuances in Bob Dylan’s vocal. George Harrison’s Rickenbacker 12-string riffs are textured and three-dimensional alongside the harmonica playing.

We’re impressed with the levels of attack the 1MOREs deliver, too: the playful and conceptual nature of the song is revealed through the attention to dynamic detail through the vocals, as each singer takes the mic in Dylan’s home studio.

Lethal Bizzle’s hectic Fester Skank is well suited to the 1MOREs’ speed and snap, but there are issues in terms of tonality. Those bass notes have a good initial hit, but there’s a lack of weight and substance that makes everything sound a bit lightweight. The treble, meanwhile, is disconnected from the rest of the frequency range and projected too far forward. It’s not bright, but it is distracting, drawing attention from the track as a whole, and over time becomes rather annoying.

In terms of dynamics, punch and openness, they are more than a match for Apple’s AirPods Pros, but that tonal imbalance makes the 1MOREs less listenable overall. The sonic benchmark for true wireless headphones at this price are the Sony WF-1000XM3s, which launched at a higher price than the 1MOREs, but are now widely available for a fair bit less and sound significantly better.

That leaves the 1MORE True Wireless ANC In-Ear Headphones with nowhere to go. One of its key features, noise-cancellation, is substandard, which makes achieving a high rating an uphill battle.

To make up for that shortfall, these 1MOREs really need to sound better than the competition. While they certainly have some sonic strengths, issues at both extremes of the frequency range make them hard to recommend overall.