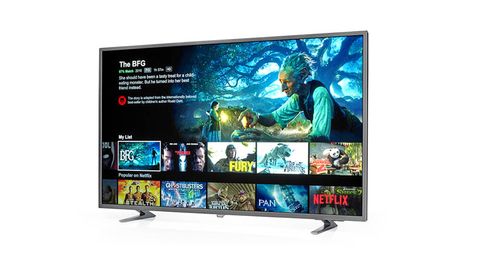 A punchy, insightful, and nuanced picture for the money. Whatever you’re watching, the 50PUS6703 will do it proud

If TV manufacturing were a sport then Philips’ 50PUS6703 would be a Bolt, or a Williams, or a Pelé. Compared to the competition, it’s almost unfair they’re in the running.

The 50PUS6703 is a superb TV at a startlingly low cost. For £600, you get a 50in 4K HDR panel, with three-way-Ambilight thrown in for good measure. And it looks darn good too.

We’d love to go straight to the pic de résistance (boom tish), but Philips doesn’t make it easy. There’s a multitude of menus to go through to get it looking its best.

You’ll have to turn off the default ‘Eco’ mode, undo all the noise-reduction settings and adjust the contrast and brightness. Then you’ll have to do it all again for HDR content, because the television treats this separately.

For non-HDR content we use the Movie preset, pushing up the colour a little while toning down sharpness, contrast, and brightness.

Colour Enhancement gets put on minimum, and Contrast Mode should be tuned so it’s “Optimized for Picture”. When the TV detects an HDR source, we prefer the “HDR Vivid” mode for top-notch performance.

It’s well worth it, though. The 50PUS6703 has the same great qualities as its predecessor, the 50PUS6272. We begin with a 4K HDR disc of Kingsman: the Golden Circle and there’s the sort of distinct punch and pop from this television competing sets have difficulty matching.

When the cybernetically-enhanced Charles Hesketh (Edward Holcroft) stands in front of the neon signs adorning an amphitheatre, the glowing yellow and red are both striking but nuanced. This television walks the fine line of bringing you bold colours while also offering a range of hues within those colours.

This same quality makes its handling of skin-tones so good too. Against the bright whites of a padded cell, Harry Hart (Colin Firth) and his puffy pink complexion looks natural and well handled.

There’s a great deal of texture to fabrics, hair and background detail - fluffy white clouds sailing around mountains both stand out against the skyline and show off the differences between their thick bodies and wispy outer strands.

Dropping down a notch in detail with Spider-Man: Homecoming on Blu-ray, the close-ups on Adrian Toomes’ (Michael Keaton) face as he drives his daughter (Laura Harrier) and Peter Parker (Tom Holland) to the homecoming dance show off the pores on his skin and the furrows of his brow while he mulls over whether this young child is indeed a superhero.

Last year’s 50PUS6272 does all of those things too, but there’s no denying this television simply does it better.

With broadcast television, the 50PUS6703 upscales and renders a perfectly enjoyable image. It’s not the last word when it comes to detail or definition – more expensive televisions are better at upscaling – but you won’t need to update your DVD collection just yet.

If there’s one slight criticism we have with this set, it’s that its black levels – while striking – can occasionally obscure detail a little. With Guardians of the Galaxy Vol. 2, and the first shot of the planet Sovereign, some of the faint lights of the stars are lost amongst the vast blackness of space.

However, this is more than a fair compromise - the greater sense of depth and richness of colour that comes from the Philips’ black levels more than make up for any minor loss of detail.

Compared to its predecessor, the 50PUS6703 has improved sound quality.

It’s more authoritative on both a small scale with dialogue, and on a larger scale when cars crash through mounds of undead flesh or into the walls of gas stations in Zombieland.

For its price it’s certainly acceptable, but should your budget allow it we would always recommend pairing this television with an appropriate soundbar (such as JVC’s £60 TH-W513B).

Top of the feature list is the three-sided Ambilight, which projects the colour palette of whatever’s on screen to the surrounding walls via little LEDs. The effect helps make the action look more dramatic, but you can turn it off if you don’t like it.

Much like Philips’ other televisions, the 50PUS6703 comes with the expected streaming apps, including Netflix and Amazon Prime Video. Only the former gives you full 4K HDR, however, as Amazon’s app still lacks HDR.

On the catch-up side, iPlayer, ITV Hub, All4 and Demand5 all make an appearance - apps are housed in a newly designed horizontal panel that pops up when you press the home button on the remote.

This is definitely easier than the user interface on older models, but it’s still not as smooth as the Android TV interface that the company’s more expensive televisions have - and definitely less colourful.

Searching the range of content in the golden age of streaming TV should be exciting, but the “Saphi” operating system this television uses (which is based on Linux) is too dull.

The remote has a Netflix button, so you can skip straight to the content, but we’d still like a better-designed control. The arrangement of buttons is cluttered, and they feel a tad too spongy for our liking.

While those small flaws can’t be entirely ignored, the quality this television provides means that, on the whole, it remains a great choice at a relatively low price.

For competing manufacturers, the 50PUS6703 will be the one to beat.