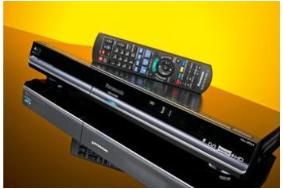 Best Blu-ray/HDD recorder, Awards 2010. If you value what it can do and are prepared to pay the price, great. Not ideal for the first-time buyer though…

Let's face it, no-one bothers to read the manual any more. But with Panasonic's DMR-BW880, it isn't so much desirable as essential that you take the time to digest the instructional blurb – all 124 pages of it.

That's because, as hugely impressive as it is, we've seldom encountered a product as complex as this.

Even precisely defining it takes some thought. In basic terms, it's a Blu-ray recorder with built-in 500GB hard-disk and twin Freeview HD tuners, so in that sense, it's no great departure from DVD recorders of yore, save for its HD capabilities.

For example, you can use it to stream a variety of digital video and audio files over your network via DLNA, and it'll also replay digital media via SD and USB.

If you prefer, you can record music directly to the hard-disk (with track, artist and title information from the Gracenote database), effectively making the Panasonic a music server. HD camcorders are well catered for too – there's a DV input, and you can both record and edit your footage.

If all that wasn't enough, the DMR-BW880 also supports the company's Viera Cast service. So, connect it to your broadband and it'll stream photos and video using Picasa and YouTube.

Heady stuff. And in fairness, the Panasonic's a fine performer too: off-air picture quality from both HD and SD channels is first-rate, while recordings to hard-disk appear transparent to the quality of the original broadcast.

An amazing range of talents
It even stands up as a Blu-ray player, exhibiting many of the same strengths as its DMP-BD85 stablemate.

Yet as impressive as all this is, it's hard to shake the feeling that this amazing range of talents (plus the correspondingly high price) serves to narrow the appeal of the DMR-BW880.

Yes, there's much to admire here: in many ways, what you're looking at is the very apogee of convergence.

But it carries with it a heavy burden in sheer complexity, not helped by on-screen menus and guides that appear dated and baffling next to the slick affairs sported by simpler set-top-box rivals. The choice is yours…

See all our recorder Best Buys