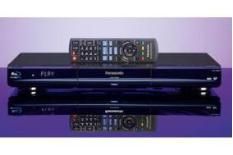 If you thought the cheaper 'BD65 was a little light on the feature front, you can consider the 'BD85 to be Panasonic's full-fat budget Blu-ray player.

There's a whole raft of features and technologies that the company has reserved for this deck. Extra functionality includes DLNA compatibility and a set of multichannel analogue outputs (useful if your home cinema amplifier is missing HDMI inputs).

Comes with a wireless link
Wireless internet connectivity is also included, but isn't integrated into the machine. Instead, Panasonic includes its own, slightly clumsy and frankly ugly-looking wireless adaptor. Other extras include an additional USB input on the front of the machine and a coaxial digital output.

Panasonic has also made a point of equipping the 'BD85 with advanced picture and sound processing technologies that you won't find in its cheaper sibling.

These include an HDMI jitter purifier that aims to reduce digital timing errors over the player's HDMI output. The 'BD85 also has a high clarity sound setting that stops electrical current flowing through the analogue video circuit, thus preventing any unwanted interference.

Spin a couple of movies and it's immediately clear that the 'BD85 is a cut above the cheaper Panasonic. It produces a pristine image that displays a greater sense of depth and realism.

Precise edge definition
Watching identical scenes from The Imaginarium of Doctor Parnassus, you're drawn to the 'BD85's extra clarity and detail. Characters and surroundings share the same inviting colour balance, but lines appear to be drawn sharper.

It's a similar story with DVD. Spin likeable rom-com It's Complicated and the 'BD85 does a fine job of presenting Characters, costumes and backgrounds with very precise edge definition.

The improvement in audio compared to the 'BD65 is even more marked, with music Blu-rays having a greater sense of rhythm. Tracks such as Justin Timberlake's Summer Love are driven along and bass notes have real clout.

While the DMP-BD85 is one of Panasonic's more expensive budget players, it's undoubtedly an attractive proposition.

If you want the extra features that it offers, you can pay the premium safe in the knowledge you're also getting greater all-round ability.