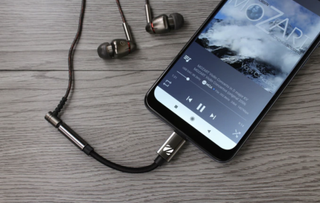 Looking to improve the sound of your smartphone practically and cheaply? Then what you need is portable DAC – and they don't come much smaller or more affordable than the Ztella.

A current Kickstarter project, the 5g in-cable DAC is designed to be the middle man between your phone and headphones to improve the sound of your music on the go.

The maker, Hong Kong-based enterprise Zorloo, has two Ztella hi-res DAC options for you: one that supports MQA and one that doesn't. With the help of American firm HELM Audio, Zorloo's fifth crowd-funded product looks dead set for production.

Zorloo claims that Ztella is the smallest USB-DAC to include MQA renderer technology, able to completely unfold an MQA file for optimum quality.

The Ztella's spec sheet further boasts the latest generation of SABRE DAC from ESS technology. Any mic or volume buttons on your connected headphone should also be fully supported.

Despite a diminutive build, the Ztella also features a neat LED indicator to notify you of the sampling rate of the music content being played. The LED glows blue when idle or playing back SD content less than or equal to 48kHz, red when playing HD content greater than 48kHz or magenta when playing a MQA file.

The Ztella DACs are listed as being plug-and-play compatible on Android, iOS, macOS and Windows 10. The USB-C native connector plus the bundled USB-A adapter allows you to connect to most popular mobile phones and computers. Apple's latest iPad Pro series, for example, comes with a USB-C connector so you can connect directly with Ztella, but for iPhone/iPads using Lightning connectors, you'll need to use a Lightning adapter. Zorloo will add one for HK $80 (£8/$10 USD) or, alternatively – and if you want something MFi-certified – you could use an Apple USB camera adapter kit to bridge the connection to Ztella.

With 21 days left to go, the Ztella has so far reached over three times its £7941 goal on Kickstarter, with 445 backers and counting. The standard version will apparently ship in December, with the MQA version slated for delivery in February 2020.