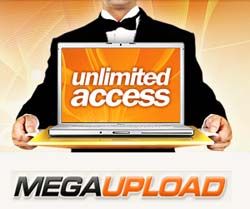 The site's founders have been charged with violating piracy laws and arrested.

According to prosecutors, Megaupload cheated copyright holders out of more than $500m (£320m) in lost revenue. The firm says it was diligent in responding to complaints about pirated material.

In response, the hackers group Anonymous has targeted the FBI and US Department of Justice websites.

The US Justice Department told the BBC that Megaupload's two co-founders Kim Dotcom, formerly known as Kim Schmitz, and Mathias Ortmann were arrested in Auckland, New Zealand along with two other employees of the business at the request of US officials.

It added that three other defendants were still at large.