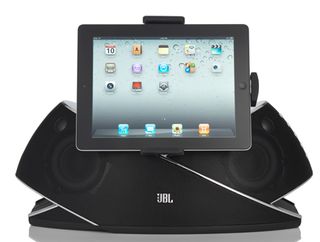 JBL's OnBeat Xtreme wireless iPod/iPad system is now on sale in the UK, priced £400 - significantly less than the expected price at its IFA launch (see below).

We hope to review the system very shortly.

JBL has expanded its OnBeat range of docking systems to include Apple AirPlay and Bluetooth wireless models, plus two new iPad-friendly designs.

Making it debut here at IFA is the OnBeat Xtreme (above), JBL's new flagship docking system. The OnBeat Xtreme features a rotating dock that allows you to position an iPad in either landscape or portrait format, but which also accomodates an iPhone or iPod (though the smaller Apples can look rather lost in the Xtreme's iPad-optimised design – see below right)

But docking isn't your only option with the OnBeat Xtreme, which also supports Bluetooth wireless audio - therefore allowing the big box to play tunes from any Bluetooth-equipped device, including computers plus non-Apple portables.

The OnBeat Xtreme also has an integrated speakerphone, making it a sonic boost for Skype or Apple Facetime video calls.

“It is a state-of-the-art portable speaker system that gets the most out of your music, movies and video games. But it is so much more, as the embedded speakerphone makes it great for video conferencing and its Bluetooth capabilities turn it into a wireless speaker for an Android smartphone or a tablet such as the Motorola Xoom or Samsung Galaxy.”

The OnBeat Xtreme also features a line input - to hook up other devices - plus a USB socket to enable both iTunes synchronisation and firmware updates. It will be avallable from next month, priced around £500.

Hands-on with the OnBeat Xtreme

We heard an early sample of the OnBeat Xtreme here at IFA and first impressions are that this has real room-filling potential; the wireless appears to work well, too. We'll follow up with a full review when production units ship next month.

Also new in JBL's range is the OnBeat Air (right), an Apple AirPlay enabled version of its existing OnBeat docking system: a smaller sibling to the Xtreme.

Available – like the original – in black or white finishes, the OnBeat Air will ship next month, and is expected to cost around £200.

Like its big brother Xtreme, the OnBeat Air can hold an iPad, iPhone or iPod, in either landscape or portrait format.

It uses Apple AirPlay's wireless streaming system if you don't want to dock your iThing.

Already in shops from JBL's AirPlay line-up is the On Air Wireless (left), which offers a wider range of features - such as clock/alarm functionality and a colour display.

As you can tell from the picture, its dock is more iPhone/iPod than iPad, though of course adding AirPlay means you can stream wirelessly from your Apple tablet.

The JBL On Air Wireless is in shops now, priced around £260.