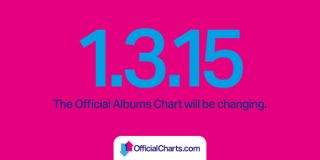 That's because, for the first time, the Official Charts Company will be including streaming data in calculating the UK's Official Albums Chart. It comes after the data was successfully incorporated into the Singles Chart last year.

According to the Official Charts Company, the move is designed to reflect the surging popularity of streaming in the UK – figures have doubled from 25 million streams a day in January 2014 to 50 million in January this year.

The change is due to come into effect from the week commencing 23rd February, which will see the Official Albums Chart Top 100 on 1st March become the first to incorporate streaming data.

Official Charts Company chairman, Korda Marshall, said: "The Official Charts are a UK institution, followed both by music fans and the industry, so we do not make changes to them lightly.

"But with more and more people listening to albums via streaming services, it is right that we are now going to reflect streaming in the Official Albums Chart."

MORE: Tidal lossless music streaming service launches in the UK and US

With this forthcoming change, it's worth considering the numbers involved - and Ed Sheeran may have reason to be cheerful as his album X was the most streamed of 2014 with over 200 million tracks from the LP streamed.

Data will come from all the usual streaming suspects: Spotify, Deezer, Napster, Google Play and Rdio to name but a few, all of which are members of the Entertainment Retailers Association – a co-owner of the Official Charts Company.

However, it appears as if steps will be taken to prevent mega hits from boosting the performance of albums; steps that are designed to reflect the overall popularity of the album itself and not the impact of highly-performing singles.

MORE: Listen to the What Hi-Fi? playlist on Spotify

The 12 most streamed songs from the standard version of the album are to be taken, with the top two "down-weighted" in line with the average of the rest. The total is then divided by 1000, before added to other sales. The 1000 ratio is used to reflect the difference in value between a track stream and the price paid for an album, according to the Official Charts Company.

Official Charts Company chief executive Martin Talbot said: "Initial indications are that the impact on actual chart positions will be modest to begin with, but we expect this to grow as streaming becomes increasingly popular."