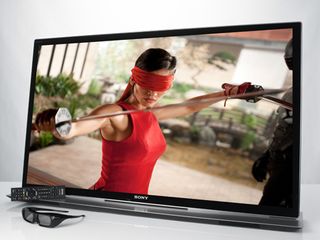 With the growing trend to larger TVs in our living rooms, families are once again congregating around the telly as the main focal point for entertainment.

That's according to the latest annual communications report from Ofcom, which suggests that the belief that the internet is killing traditional TV viewing may be exaggerated.

"Ten years ago people were deserting the living room, the trend was for children to have TVs in their bedrooms," says James Thickett, Ofcom's director of research.

"But since the digital switch-over, people haven't been replacing analogue TVs and the whole family are coming back into the living room, bringing their own devices with them."

The move towards bigger screen sizes continues, with more than a third of TVs sold in the UK in the first quarter of 2012 either being "super-large" (33in-42in) or "jumbo-sized" (43in+).

Internet-enabled TVs are growing in popularity too, with 5% of UK households now owning one. Among those who own them, more than two thirds say they've used the internet connection on their TV.

In the same research, Ofcom reports that:

• 42% of these say their smartphone is the most important device for accessing the internet, with 42% regularly using social networking sites

• Tablet ownership is also on the rise, with 11% owning such a devcie, up from 2% last year

More than half of smartphone users claim to use their phone in some way while out shopping.