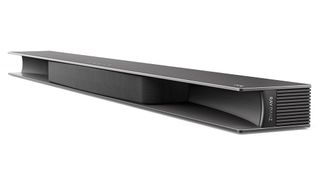 TCL has confirmed the roll out of its X-Series TVs in Europe, which will arrive at the beginning of 2020, during IFA 2019.

TCL was second in the world for TV shipments in 2018 and has put its faith in this Mini LED/QLED combo to produce in the X10 the world’s thinnest direct-lit TV. It believes they deliver more life-like images than any other.

The TCL X10 comes with an integrated 2.2 Onkyo soundbar and a built-in 4K, wide-angle video camera which rises and retracts back into the chassis as required by video applications such as Skype. The TVs are also both Dolby Vision and HDR10-compatible. Like all of the 2019 line-up, they are Android TV-based with TCL’s AI-IN UI skin on top.

Slightly below the X10s are the TCL X81 QLED TVs. Razor-thin and virtually bezel-less, these sets come fitted with 2.1 channel Onkyo soundbars and will be available in 55in and 65in models - the TCL 55X815 and 65X815.

Sadly, it's only the lower C-range that we'll see in the UK with the TCL EC78. It's still frameless and ultra-slim and comes with all the 4K, Dolby Atmos, HDR fun as the X-series models but it's not a QLED and not a Mini LED system either. Pity. There's no built-in soundbar either. The TCL EC78 will be available from September 2019 in 55-inch and 65-inch models: the TCL 55EC780 and 65EC780.

TCL’s big IFA reveal on home cinema sound is its Ray-Danz soundbar with Dolby Atmos audio. It’s a 3.1.2 set-up with front and side-firing drivers as well as ones on the top for the Atmos effect.

Instead of shooting the audio straight out to the sofa, however, TCL’s design intention was to reflect audio off living room walls and ceilings with everything arriving at the listener at precisely the right time. It uses what TCL says is a unique acoustic reflector under the hood to create an "extraordinarily wide soundstage".

The company is also bringing its TS5 and TS7 soundbars to the UK and European shores after a successful launch and warm reception over in the US.

TCL has also unveiled two sets of true wireless headphones at IFA 2019. At their core are 5.8mm drivers housed in sweat and splash-proof materials.

The TCL ACTV500TWS are more hotrod in design, available in either black or white with an orange accent. The battery and charge case make for 33 hours of listening time. Designed for more casual use are the TCL SOCL500TWS, available in red, black, pink and blue, with a slightly lower 26 hours battery life.