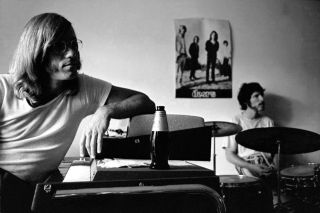 Studio to Stereo is an exhibition of photographs that delve behind-the-scenes and into the studios to see seven seminal albums being recorded, with artists including The Doors, Black Sabbath and Paul McCartney among others.

In addition to the visual element, organisers of the exhibition have claimed that visitors will be able to immerse themselves in that studio experience and listen to tracks in high-resolution and as they were 'intended to be heard'

Sony has partnered with Proud Galleries to present Studio to Stereo, which has been put together by Alex Proud. It features narration from BBC 6 Music DJ Tom Ravenscroft, who selected tracks to accompany the photographs.

Proud said: "Through this exhibition I’ve been able to explore the different and unique ways that artists set themselves up in the studio – you can now hear and see the magic.

"The rooms they choose, the way they set up the instruments and spread themselves across the space, the clothes they wear and the look they project while they’re recording, it all has an effect on the end sound."

Sony is one of the major manufacturers leading the high-resolution audio charge, having released equipment including the entry-level NWZ-A15 portable player. The Studio to Stereo exhibition runs from 20th November until 3rd December.

The list of songs you can hear at Studio to Stereo are:

Stable 1 – Bob Dylan, Motorpsycho Nightmare and My Back Pages from Another Side of Bob Dylan; Stable 2 – Coldplay, White Shadows and Fix You from X&Y; Stable 3 – Pink Floyd, Lucifer Sam and Pow R. Toc H. from The Piper At The Gates Of Dawn; Stable 4 – The Doors, L’America and Riders On The Storm from LA Women; Stable 5 – Tame Impala, Be Above It and Elephant from Lonerism; and Stable 6 – Black Sabbath, Planet Caravan and War Pigs from Paranoid.

[Image: The Doors by Frank Lisciandro]