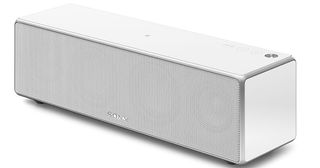 The SRS-Z5 (£170) and SRS-Z7 (£260) (pictured above) speakers have been fitted with newly developed full-range drivers, which Sony claims deliver “a smooth, extended frequency response”. They also come with two subwoofers and a passive radiator to handle low frequencies.

Music can be streamed over a wi-fi network from a home media server, or from a mobile device via Google Cast. Spotify Connect is also supported for subscribers with a Premium account. The SRS-Z7 also benefits from hi-res audio support.

Multi-room functions can be set up using Sony’s SongPal app for iOS and Android. An update to the app, scheduled for June, will allow the speakers to be added to one of Sony’s TVs or soundbars to create left and right rear channels. Alternatively, two speakers can be connected together to create a two-channel stereo pair.

The SRS-XB3 (£130) and SRS-XB2 (£90) water-resistant portable speakers both boast long battery lives: 24 hours for SRS-XB3 and 12 hours for the XB2. Both are waterproof to IPX5 standards, so they’ll survive a splash in the kitchen.

Two XB3 or XB2 speakers can be partnered together using the 'Speaker Add' function to create a stereo pair.

All four speakers will be available from April.