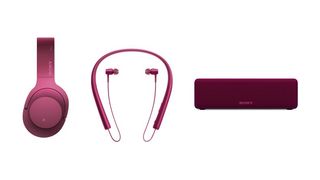 Sony has launched three new additions to its h.ear line-up at CES 2016 today: the h.ear on Wireless NCs, the h.ear in Wireless and the h.ear go portable wireless speaker.

The Sony h.ear on Wireless NCs are a pair of Bluetooth on-ear headphones with Digital Noise-Cancelling, which aims to minimise/remove ambient noise by constantly analysing your surroundings and choosing the most effective noise-cancelling mode for the best sound quality.

The specially designed ear pads aren't just for comfort, either - they also ensure no music leaks out to annoy your fellow communters or co-workers.

Sony claims that the battery life lasts 20 hours, even with Bluetooth and active noise-cancelling switched on.

For those that prefer their wireless headphones to be in-ears, the Sony h.ear in Wireless is Bluetooth-enabled and has a behind-the-neck design for a more comfortable fit. The £130 in-ears feature a in-built mic and 'HD voice support' for better quality hands-free phone calls.

There seems to be no end to portable wireless speakers, but Sony's h.ear go might just pique your interest away from all the others.

For starters, Sony claims the h.ear go is the world's smallest portable high-resolution audio wireless speaker. It also features built-in support for Spotify Connect and Google Cast - so you can cast any music app (such as Google Play, Deezer or Tidal) from smartphone to speaker.

It even has multi-room powers. With the SongPal app, you can link two h.ear go speakers to use in stereo mode, or slot it into your existing Sony multi-room system as a standalone speaker.

The h.ear go has a 35mm-diamenter full-range speaker unit, and despite the compact size, Sony claims you can get room-filling bass thanks to dual passie radiators in the left and right speaker chambers.

Battery life is a respectable 12 hours.