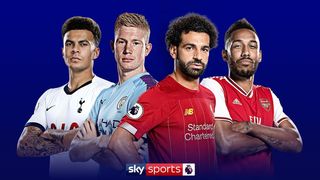 The Premier League returns tomorrow evening with two matches screened exclusively on Sky Sports, and Now TV is currently offering a huge saving on its Month Pass so fans in the UK can catch all the rest of the action without breaking the bank.

For only £25 per month, down from £33.99, viewers will receive all 11 Sky Sports channels – including its Football and Premier League channels – for the next three months. That will cover all 64 top flight games shown on Sky Sports over the next six weeks, as well as the remaining EFL fixtures and end of season play-offs.

The action begins tomorrow evening (Wednesday 17th) with Aston Villa hosting Sheffield United before Arsenal travel to Manchester City, and Sky has already confirmed it will show a number of the season's biggest remaining ties.

That includes Tottenham Hotspur against Manchester United on Friday night and the Merseyside derby on Sunday, when Liverpool could win their first league title in three decades.

Adding Now TV's Boost Pass – £3 per month after an initial seven-day trial – will allow you to watch in 1080p HD and 5.1 Dolby surround sound, as well as on three screens at the same time.

If you're based in the Republic of Ireland, Now TV is offering an even more enticing offer of six months Sky Sports and BT Sport for only €40 per month – a 45% saving – which means you'll also get the latter service's 20 remaining Premier League fixtures, what's left of the Bundesliga and the UEFA Champions League.

In the United States, an NBC Sports Gold Season Pass is now only $9.99, which unlocks every minute of the Premier League's last 92 fixtures.

Don't forget you'll need to use a VPN if you want to use any of the above services while stuck away from home. You can find out all about those and which are our favourite services on our best VPN deals page.