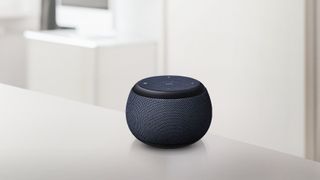 Samsung's first home speaker should be with us very soon. The firm announced at CES that the Samsung Galaxy Home Mini will launch early in 2020, though there's still no word on when the originally-planned Galaxy Home will launch.

The Galaxy Home Mini is a rival to the Amazon Echo Dot and Google Home Mini. In other words, it's a small smart speaker, but instead of boasting Alexa or Google Assistant built-in, it has Bixby, Samsung's own voice-activated personal assistant.

Much like its rivals, you speak to it to control it. Hook it up to your internet of things ecosystem using Samsung's SmartThings platform, and it can control your thermostat, lights, fridge and other internet-connected devices and appliances.

Audio comes courtesy of the Samsung-owned AKG, which is known for its quality headphones.

Samsung's smart speakers haven't exactly had a smooth ride so far. The company first announced the Galaxy Home 18 months ago, back in August 2018. Since then, it has been delayed multiple times, and is still yet to gain a launch date. According to Bloomberg, the non-mini version of the device could even be cancelled altogether, as Samsung is debating whether to launch it at all.

Since the Galaxy Home's initial announcement, Samsung started testing the Galaxy Home Mini through a public beta in its native South Korea. And it's this smaller – and presumably cheaper – device that's now closer to finally seeing the light of day.

So should Google and Amazon be worried? Hopefully we'll find out soon...